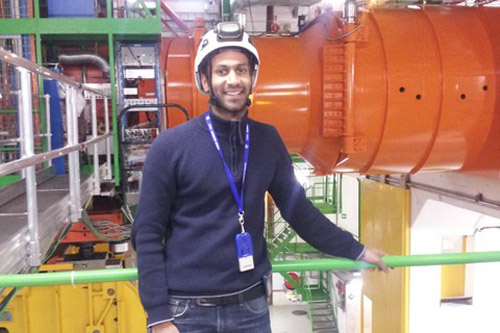 Dr Sudarshan Paramesvaran with the Large Hadron Collider at CERN 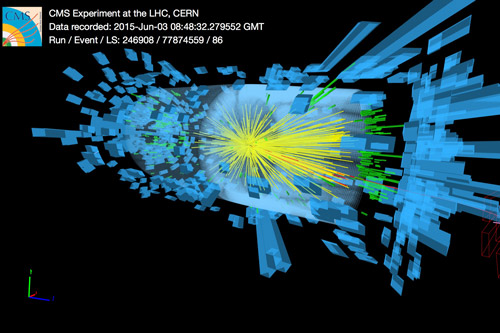 A particle physicist from the University of Bristol has been appointed to a senior role at one of the largest and most prestigious scientific projects in the world.

Dr Sudarshan Paramesvaran from the School of Physics has taken up the position of Run Coordinator for one of the key experiments at CERN, the European Organisation for Nuclear Research. At this international laboratory near Geneva, more than 10,000 physicists and engineers from around the world are probing the structure of the Universe.

Scientists at CERN use some of the most complex machines in the world to learn how the laws of nature work at a basic level. Following the discovery of the Higgs boson – the particle that allows the Universe to exist – in 2012, the hunt is now on to identify ‘dark matter’. This mysterious substance makes up 80 percent of the material in the Universe, but has never been produced or detected on Earth.

Dr Paramesvaran will take charge of the Compact Muon Solenoid (CMS) detector, buried 150m underground in the French countryside. The experiment uses a huge solenoid magnet to study particles from collisions in the Large Hadron Collider (LHC). He will be in operational charge of the experiment, and be a key member of the management team. Coordinating the day-to-day efforts of hundreds of physicists, his role will be similar to the flight director of a space mission.

The giant CMS detector was built by a team of over 3,000 scientists and engineers over the last 20 years. The University of Bristol is responsible for key aspects of the detector, including the computerised 'brain' that analyses each of the 40 million collisions per second. The detector has a wide-ranging physics programme, looking for signs of new phenomena that give clues to how the Universe works, and how it came into being.

Dr Paramesvaran said: "We'll be managing the operation of the detector 24/7. I'll be chairing a daily meeting at the experiment to examine our recorded data, learn from the results, and identify where we can make improvements.

"We'll then focus on the next 24 hours at a time, plan any work that needs to be done, always with the goal that we aim for 100 percent efficiency in data-taking. Keeping CMS running needs intense teamwork from scientists around the world, and I'll be responsible for making that happen."

As well as managing detector operations, the Run Coordinator is the experiment’s link to the LHC itself. The accelerator has to plan in the same way as the experiments, and interfacing between the two is crucial to achieve scientific goals.

Professor Dave Newbold, Principal Investigator for CMS-UK, said: "We are entering a golden era in particle physics – the LHC is moving into completely unknown territory, and in the next few years we will learn more about our Universe than ever before. The University is proud that one of our team will be taking the helm at a crucial time in science."