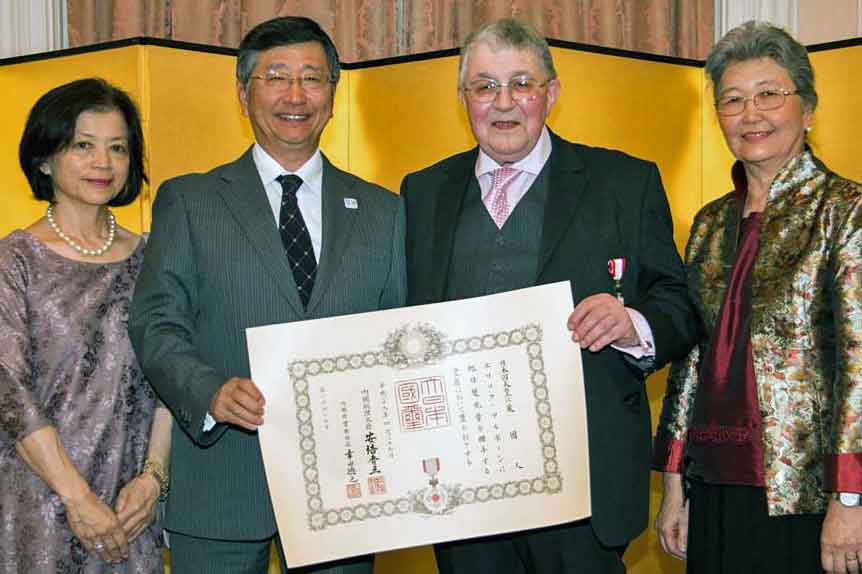 Dr Eric Albone MBE, Co-Founder and Director of the Clifton Scientific Trust, has been awarded the Order of the Rising Sun, Gold and Silver Rays by the government of Japan.

Dr Albone, an Elected Convocation Member of University Court and an Honorary Research Associate at the University’s Centre for Public Engagement, also established the UK-Japan Young Scientist Workshop Programme, which since 2001 has brought over one thousand post-16 school and college students from Japan and the UK together for workshops hosted by universities in both countries.

Just after the earthquake and tsunami that hit eastern Japan in March 2011, Dr Albone used funds he had raised to finance the hosting of 21 students and their teachers from six schools in Japan in areas afflicted by the disaster. In subsequent years he has continued to welcome students from these areas into the workshop programme.

Dr Albone was presented with the award at the Embassy of Japan in London. Mr Masao Uchibori, Governor of Fukushima Prefecture, commented in a citation that ‘the opportunity that you provided to high school students in Fukushima Prefecture to take part in the Young Scientists Workshop gave them dreams and hope at an incredibly difficult time, and this became an extremely large source of strength for our prefecture as we took steps towards recovery.’