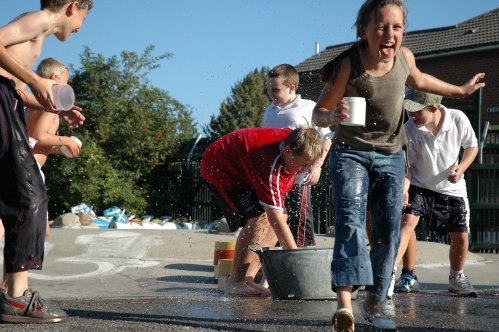 New research from the University of Bristol shows that playing outside, aided by regular road closures, helps to increase children’s physical activity.

The report confirms that temporary street closures help children to meet the daily target of 60 minutes moderate to vigorous physical activity set out in the government's obesity strategy.

The insights are based on the highly successful Street Play project, funded by the Department of Health, and delivered by Play England with partners Playing Out, London Play and the University of Bristol.

The project supported parents and communities to hold regular road closures, enabling children to play outside in 33 geographically diverse areas, with a sustainable network of over 5,000 volunteers creating over 60,000 additional play opportunities.

The report 'Why temporary street closures for play make sense for public health', led by Professor Angie Page and colleagues in the University of Bristol's School for Policy Studies, found that outdoor, active play was more likely to replace sedentary and screen-based activities, than physical activities that normally occur after school.

Since the project's conclusion in March 2016, over 500 streets in 45 different local authority areas are involved in active street play.

Professor Page said: "We know that time spent outdoors is related to greater daily physical activity and reduced risk of obesity. However, few interventions are effective at increasing physical activity in the local environment. This resident-led intervention shows the potential for meaningful increases in physical activity as well as social benefits to both children and the communities in which they live. It is relatively low cost, scaleable and potentially sustainable – this is why it makes sense for public health."

A second report, written by researcher and author Tim Gill in response to concerns about the decline in children's opportunities for outdoor play, highlighted a range of factors that influence the likelihood of success of street play initiatives in disadvantaged areas.

Based on interviews with people involved in schemes across five local authorities, he showed the benefits of streamlining local authority application procedures and removing cost barriers, as well as noting the importance of local sources of practical support working alongside local authorities.

The report recommends adapting the street play model for housing estates as well as supporting where children spontaneously play already in neighbourhood streets.

Nicola Butler, Chair of Trustees at Play England, said: "Children’s time spent outside is falling, particularly amongst girls. Yet the evidence is clear. When children play out they are three times more likely to be physically active. Giving children access to free outdoor play opportunities is the best way of tackling problems like obesity. Not only is active play physically good for children and young people, it helps their mental health too. We need more initiatives like street play at the heart of the government’s health and wellbeing agenda."

Alice Ferguson, Co-founder and Managing Director of Playing Out, said: "We are delighted to have hard evidence that shows what we already knew - street play is great for children and for communities. Government and local authorities should now be supporting this in any way they can."