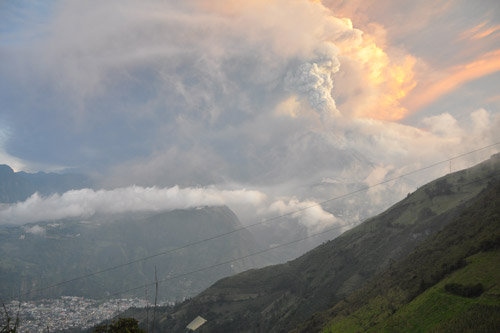 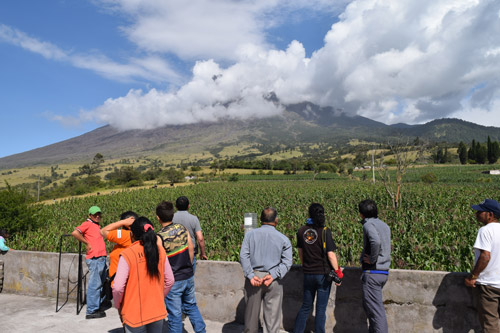 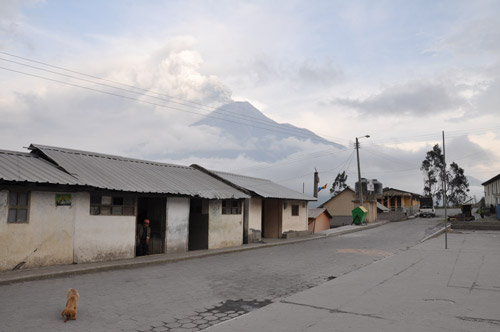 Ash fall on a nearby town from a small eruption of Tungurahua Volcano. Teresa Armijos

The study focused on the 'Throat of Fire' Tungurahua volcano in the Ecuadorian Andes, which is surrounded by several towns, with around 30,000 people living close by. The researchers examined how the official disaster risk management system, scientific monitoring and community knowledge have adapted and evolved over 15 years to be able to cope with long-term volcanic activity.

The findings, published in the journal Global Environmental Change, show that the network has helped make improvements in monitoring, decision-making, communication systems and evacuations in Tungurahua.

The team of interdisciplinary researchers suggest the success story there forms a blueprint for best practice community engagement in disaster risk reduction projects around the world – where more than 600 million people live close to active volcanoes, and around two million have been displaced as a result of volcanic activity over the last 30 years.

Lead author Dr Teresa Armijos, from UEA's School of International Development, said: "We argue that the shadow network around Tungurahua volcano has played a key role in improving collective responses to volcanic risk, allowing people to continue farming and maintain their livelihoods in relative safety during heightened volcanic activity, and minimising the need for forced evacuations, which are highly disruptive.

"By looking at the non-official interactions in combination with the official disaster risk management system, our findings also show how communities can adapt to the complex problems and environmental change created by a long-lived volcanic eruption. This relationship is vital to enable a strong response to hazards in the future and is a blueprint for how other communities can engage with authorities and scientists to reduce disaster risk in the longer term."

The team conducted 130 interviews with government officials, scientists, community leaders and people living close to the Tungurahua volcano. Tensions between public and experts are common in hazard assessment and communication. In this case, however, and as a result of the shadow networks, there has been increased trust in the authorities and scientists, enabling better communication between the different groups, with ad-hoc support from the military and local government to move people in and out of high-risk areas during periods of heightened volcanic activity.

Another key element of this shadow network has been its role in generating observations of the volcano in near real-time and communicating these with scientists.

Patty Mothes, from the Instituto Geofisico Escuela Politecnica Nacional (IG-EPN), is an investigator on the umbrella project Strengthening Resilience in Volcanic Areas (STREVA) and contributed to the research. She said: "This study is very important in that it documents the success of a local volunteer group who have stuck together for almost 20 years and their close relationship with the volcano, its activity and the scientists like us who monitor it.

"There is a trust that has developed and is expressed between the volunteers and the monitoring scientists. This trust is maintained by having daily radio calls and also by working together in the field. There is a good dose of sharing, mutual trust, and the activity of the volcano to keep everyone interested."

The team carried out a detailed study of communication strategies and social responses during two periods of escalating volcanic activity in Tungurahua in 2006 and 2014. In 2006, an eruption killed six people and destroyed more than 50 homes. In the years before and after this eruption, intense ash falls have destroyed crops, killed animals, and damaged roads and other infrastructure. Despite this, hundreds of families continue to live and work on the slopes of the volcano to sustain their livelihoods.

By 2014, processes between community volunteers, local scientists and authorities had improved with a pan-volcano radio system and significant scientific adaptations including an improved capability to monitor and interpret the volcano’s behaviour.

Co-author Dr Jeremy Phillips, of the University of Bristol’s School of Earth Sciences, said: "By examining cases like this, we can learn lessons about the potential of community-based disaster risk reduction in other contexts. It provides valuable evidence for how to reduce volcanic risk in practice, which is a critical step in finding ways of increasing society's resilience to events of this nature."

Ms Mothes added that as a result of the lessons learned at Tungurahua, the IG-EPN is already involved in two other volunteer networks at active volcanoes, Cotopaxi and Cerro Negro-Chiles on the Ecuador-Colombia border.

The Instituto Geofisico Escuela Politecnica Nacional of Ecuador is the body responsible for monitoring the more than 50 potentially active volcanoes in Ecuador. IGEPN has run a fully-staffed volcano observatory at the base of Tungurahua since the eruption started in 1999.

The Strengthening Resilience in Volcanic Areas (STREVA) project is a multi-partner, multi-institution research project funded by the UK Natural Environment and Economic and Social Research Councils. It aims to find new interdisciplinary understandings of volcanic risk that will contribute to improved community resilience. www.streva.ac.uk