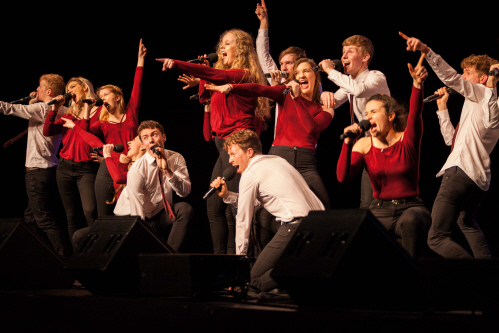 From the Student Union to our screens, the University of Bristol’s student a cappella group, The Bristol Suspensions, make their TV debut in brand new, high-energy talent competition.

The students are set to join the fiercely waged war of warbling on Saturday the 8 July 2017. Pitch Battle, which was inspired by the film Pitch Perfect, pits singing groups of up to 25 members against each other in an a cappella singing contest. A prize of £50,000 is at stake for the overall winning team.

Hosted by former Great British Bake Off star Mel Giedroyc, Bristol’s representatives will be subject to scrutiny by the star studded judging panel which is headed up by choirmaster Gareth Malone, American singer Kelis, and the guest judge of the week, Seal.

The Bristol Suspensions, who are the 2016 UK University A Cappella Champions, are one of 30 groups selected for the live show.

There are five different heats, and the winner of each week will advance to the live finals, as well as the Judges’ Wildcard – an act from any of the five shows who will be given a second chance to show off their vocal talents.

The 30 groups taking part have already beaten off stiff competition from the five other aca-groups in the initial round of auditions to earn their place on the show. The competition is reaching a crescendo and winning will be no mean feat.

Joe Pickin, The Bristol Suspensions Group Manager and Assistant Musical Director, said: “We are over the moon to be involved with Pitch Battle. The standard of groups that we are up against is extremely high and has really pushed us to be our absolute best. The whole process has been a blast, including some fantastic vocal training. We can’t wait to see ourselves on screen!”

The Bristol Suspensions formed in October 2014 and are a mixed a cappella group made up of 16 male and female students from the University of Bristol. The group members perform regularly at both private and public functions as well as having a début album, a second album out shortly, three music videos, a live radio performance and a bevy of awards under their belt.

In 2015 The Bristol Suspensions performed an a cappella cover of Uptown Funk which went Bristol- viral.

Tune into BBC One at 7.30pm on Saturday, 8 July to see how The Bristol Suspensions get on.