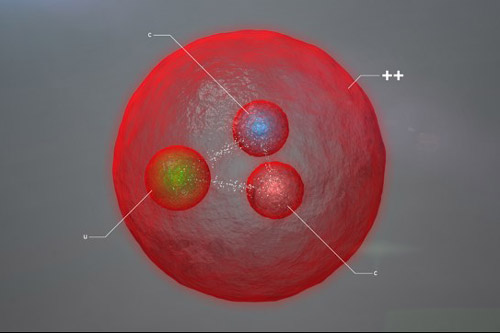 Like the proton, the chicc is made of three quarks. However, where the proton has two up quarks, the chicc has two charm quarks, which are 500 times heavier, thus creating to a very different object.

Five years on from discovering the Higgs boson, a team of international scientists have discovered a brand new heavy particle at the LHCb experiment at CERN's Large Hadron Collider (LHC).

The new particle, named Xi-cc++ (pronounced Ksī-CC plus-plus), is part of a family of “doubly charmed baryons” that are predicted to exist by the Standard Model theory of particle physics, but this is the first time scientists have been able to confirm their existence.

Particle physicists from the University of Bristol have played an important part in this discovery with a team having been involved in the design, build and ongoing upgrades to the LHCb detector.

This is one of the four main experiments at the Large Hadron Collider at CERN which is investigating the subtle differences between matter and antimatter in a bid to answer one of the most fundamental questions – why is our Universe made of matter?

Chris Parkes, deputy spokesperson for the experiment and Professor of experimental particle physics at the University of Manchester, said: "This discovery opens up a new field of particle physics research. An entire family of doubly charmed baryons, related to this particle, now await discovery!"

Nearly all the matter that we see around us is made of baryons, which are common particles composed of three quarks, the best-known being protons and neutrons. But there are six types of existing quarks, and theoretically many different potential combinations could form other kinds of baryons. Baryons so far observed are all made of, at most, one heavy quark such as a bottom or charm quark.

University of Glasgow physicist Dr Patrick Spradlin, who led the research and announced the findings at the European Physical Society Conference on High Energy Physics in Venice last week, said: "The properties of the newly discovered baryon shed light on a longstanding puzzle surrounding the experimental status of baryons containing two charm quarks, opening an exciting new branch of investigation for LHCb."

Guy Wilkinson, former Spokesperson of the collaboration, added: "In contrast to other baryons, in which the three quarks perform an elaborate dance around each other, a doubly heavy baryon is expected to act like a planetary system, where the two heavy quarks play the role of heavy stars orbiting one around the other, with the lighter quark orbiting around this binary system."

Dr Paras Naik from the University of Bristol’s School of Physics, said:  "It's fantastic to be part of the team that has played a part in making this major discovery. The analysis used to discover the Xi-cc++ relies on the accurate identification of three different types of particles: protons, kaons, and pions.

"This identification relies heavily on powerful information from LHCb's 'RICH' detectors. A team from Bristol is responsible for these detectors' mirrors' alignment. The key contribution from our recent work is that this alignment is newly ensured in “real-time” - this contributes to instant calibration of all detector subsystems, which results in ready-to-analyse data.

"Thanks in part to our contribution to the real-time alignment and calibration, the Xi-cc++ result was obtained and validated much more quickly than it could have been in years past, where such calibrations were performed after the data was taken."

The observation of this new baryon proved to be challenging and has been made possible owing to the high production rate of heavy quarks at the LHC and to the unique capabilities of the LHCb.

This result is based on 13 TeV data recorded during run 2 at the Large Hadron Collider, and confirmed using 8 TeV data from run 1. The collaboration has submitted a paper reporting these findings to the journal Physical Review Letters.

STFC & CERN
The Science and Technology Facilities Council (STFC) co-ordinates and manages the UK’s involvement and subscription with CERN. The UK’s influence on both CERN Council and CERN Finance Committee is coordinated through the UK Committee on CERN (UKCC). UK membership of CERN gives our physicists and engineers access to the experiments and allows UK industry to bid for contracts, UK nationals to compete for jobs and research positions at CERN, and UK schools and teachers to visit. UK scientists hold many key roles at CERN. Firms in the UK win contracts for work at CERN worth millions of pounds each year. The impact of winning contracts is often even greater as it enables companies to win business elsewhere.

STFC
The Science and Technology Facilities Council is keeping the UK at the forefront of international science and tackling some of the most significant challenges facing society such as meeting our future energy needs, monitoring and understanding climate change, and global security. The Council has a broad science portfolio and works with the academic and industrial communities to share its expertise in materials science, space and ground-based astronomy technologies, laser science, microelectronics, wafer scale manufacturing, particle and nuclear physics, alternative energy production, radio communications and radar. STFC operates or hosts world class experimental facilities including in the UK the ISIS pulsed neutron source, the Central Laser Facility, and LOFAR, and is also the majority shareholder in Diamond Light Source Ltd. STFC enables UK researchers to access leading international science facilities by funding membership of international bodies including European Laboratory for Particle Physics (CERN), the Institut Laue Langevin (ILL), European Synchrotron Radiation Facility (ESRF) and the European Southern Observatory (ESO). STFC is one of seven publicly-funded research councils. It is an independent, non-departmental public body of the Department for Business, Energy & Industrial Strategy (BEIS).  http://www.stfc.ac.uk/