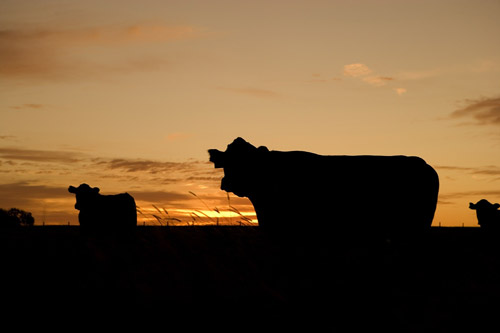 Over the course of the Neolithic period, secondary products from cattle such as milk, manure and animal power became more important.

This led to larger herds, and the increased demand for grazing resources could have led to herding strategies that took advantage of grazing grounds away from the permanent settlement.

However, until now there was little direct evidence for prehistoric cattle mobility.

To reconstruct cattle mobility and infer herding management, an international team of researchers – which included the University of Bristol - analysed strontium isotopes in 39 molars from 25 cattle in a Neolithic settlement in what is now Switzerland. Some of this work was carried out in the isotope laboratories of Bristol's School of Earth Sciences.

The findings of the study have been published this week in the journal PLoS One.

The settlement, which was occupied for 15 years, had 27 houses and the teeth could be assigned to 12 of them. Strontium signatures reflect local soil and plants, and can vary over relatively short distances.

In addition, the researchers found that these three herding strategies were not uniformly represented in various areas of the settlement.

This suggests differential access to the most favorable grazing grounds, which could have contributed to social inequalities between groups or households.

Consequently, say the researchers, the increasing importance of cattle may have been a starting point for the socioeconomic differentiation that later became widespread during the European Bronze Age.

Dr Volker Heyd, from the University of Bristol's Department of Archaeology and Anthropology, said: "Our results, in their precision, are a breakthrough in our understanding of prehistoric cattle herding economies and the social organisation of the humans behind.

"Soon, we will also generate the same accuracy for human teeth, enabling the reconstruction of individual life histories and revolutionizing mobility and migration studies of past societies."