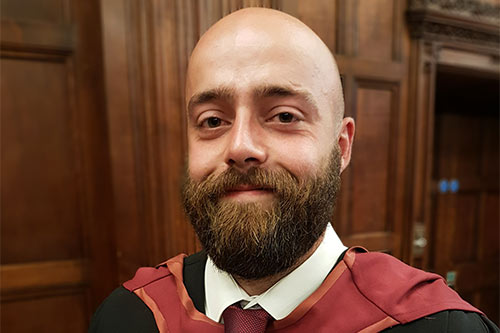 The first students who successfully completed the University of Bristol’s innovative Foundation Year in Arts and Humanities and went on to study for a degree have graduated this week.

Launched in 2013, the year-long course was designed to make higher education a possibility for people who believed that their lack of qualifications closed down access to university level study or for those who thought that they had left it ‘too late’.

Since then 94 students have successfully completed the programme and 74 have progressed to a degree. A further 31 students will start the course in September.

Ninety percent of those taking part in the programme have no A-levels and a high number of participants come from groups under-represented in higher education – many are the first in their family to attend university.

In total 17 students from the first cohort will graduate this week or next year, depending on the length of their course, while two have gone on to complete programmes elsewhere.

At the end of the Foundation Year, students can opt to go on to any degree in the Faculty of Arts and to some subjects beyond it. The students are graduating in a range of subjects including English, History of Art, Philosophy, Liberal Arts, Anthropology and Childhood Studies.

Among the graduates is 26-year-old Callum Wallace from Bristol who collected his degree today (Friday), achieving a 2:1 in Philosophy.

Discharged from the army at the age of 22 because of a prior back injury, his life plans suddenly changed. Having expected to spend the next 20 years in the military, and with no A-levels to fall back on, finding himself back on ‘civvy street’ was a bit of a shock.

He said: “I’d done GCSEs at school, but I was quite lazy. I started A-levels, but wasn’t enjoying doing them, so I decided to join the army at 17. I was a regular soldier in the Royal Engineers for three years, but my back injury worsened and I had to leave.

“My doctor suggested that studying might be good for me and I had been thinking about doing a degree in philosophy but didn’t know if I could, without A-levels. Then I heard about another way into university - the Foundation Year in Arts and Humanities at the University of Bristol.

“I have thoroughly enjoyed getting back into education; so much so that I’d really like to go on to do a Masters and then a PhD in Philosophy, with the overall aim of going into teaching.

“The Foundation Year is a brilliant opportunity which has opened so many doors to me. If, like me, you’ve written off any chance of undertaking a degree, give it a go – you might surprise yourself.”

Earlier this month, the Office for Fair Access (OFFA) called on universities to do more work like the Foundation Year, to help adults without conventional qualifications return to study. The Foundation Year was cited as an example of good practice in a report commissioned by OFFA on work universities can do with adult learners from disadvantaged backgrounds.

Tom Sperlinger, from the Department of English, is one of the course directors. He said: “The Foundation Year is a very special course to teach on because the students come from such a wide range of backgrounds and that enriches every discussion we have.

“This group of students were pioneers, helping us to create what was a brand new, alternative route into our programmes for students without conventional qualifications. They’ve shown how much it is possible for students coming through a route of this kind to achieve.

“Students on the Foundation Year are often returning to study after a gap and have overcome a range of challenges. Many of the students juggle the course and degree with part-time work or caring responsibilities.

“They’ve all worked incredibly hard over the last four years and have achieved fantastic results. We congratulate Callum and all of the other students graduating on their achievements, and hope their success will inspire others looking for a route back into education.”

Mason Ammar, Undergraduate Education Officer at University of Bristol Students’ Union, said: “I believe that education should be accessible to all and so it is great to see the Foundation Year open up the university experience to students who would not previously have been eligible or felt able to apply.

“The Foundation Year students bring a real benefit to the wider student body, bringing different experiences and increased diversity to the student population at Bristol.”

The deadline for applications to the course for September 2018 is January 2018. In addition, the University of Bristol also runs a range of taster courses with local community groups and preparatory courses. For more information email arts-fyah@bristol.ac.uk