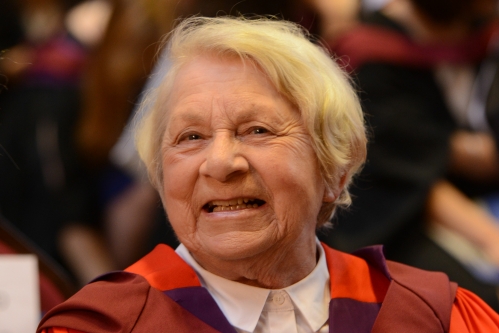 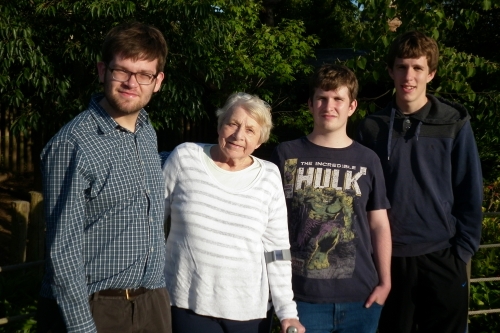 Peggy with her grandsons Dominic, Oliver and Charlie

An ‘inspirational’ 86-year-old has become the oldest student to graduate from the University of Bristol.

Peggy Styles, from Failand, completed an EdD – the educational equivalent of a PhD – earlier this year graduated today [19 July] with fellow students from the Graduate School of Education.

She has shown great resilience during her eight-year journey to becoming Dr Styles, overcoming a bad kidney infection which left Peggy fighting for her life around three years ago and subsequently suspending her studies for 18 months while she battled back to good health.

Peggy said: "I was so ill that I nearly died. I was in hospital for a month and had to learn to walk again. The University was absolutely super and agreed to suspend my studies until I felt better. I was determined to finish my doctorate."

Then, just as she was finishing her 48,000-word dissertation, her husband John died in July 2016.

Peggy was joined by her proud daughter Julie Kane, son-in-law David and her three grandsons when she crosses the stage in the Wills Memorial Building to collect her doctorate.

When asked how it will feel to graduate after eight years, Peggy replied: "I shall be quite grateful to get up to the stage without falling over. I wouldn’t want to fall down at the last hurdle!

"Although I’m 86, I don’t really feel that old. My legs and arms are not what they were but my tongue still wags and my brain still functions. I’d keep studying forever if I could."

It was her grandson Oliver who sparked Peggy's decision to return to education when he asked her for help with a school project looking at what it was like to live through World War Two.

The question prompted Peggy to reflect on how much her life – and education - had been impacted by the war.

She was born in England to Belgian parents in 1931 and was six when the family moved back to Belgium.  They returned to England as refugees in 1940, managing to escape on the last troop ship sailing out of St Malo before the harbour was blown up.

The upheaval, in addition to being schooled in different languages, impacted upon Peggy's education and she left school at 15.

When her husband left the army and got a job in Scotland managing a factory, Peggy helped to set-up a refuge for abused women – a voluntary role which sparked a lifelong interest in counselling.

She decided to return to education when the family relocated to Bristol, undertaking a postgraduate certificate and diploma in counselling at the University of Bristol, which was shortly followed up with a master's. With the qualifications under her belt, Peggy’s been working as a counsellor until fairly recently.

The title of Peggy's dissertation for her doctorate was 'Old Wives Tales? Changing my Perception of the World', and it aimed to acquaint the next generation with the history of the 20th Century from a human and family perspective, and also to mark the gradual changes in attitude to the education of women which has taken place within living memory.

Peggy explained: "I was young during wartime and going to university wasn’t really on anyone’s agenda at all. Life was quite different.

"Although the post-war period is still within living memory, culture has changed so much. This is one of the reasons I wanted to write about how society's attitude towards the education of women has gradually changed.

"I was lucky that the University of Bristol took me on for my postgraduate certificate and diploma in the 90s, especially as I had no A-levels. After that I think I got slightly addicted to learning and the University has become like a second home. What I’ll miss most is my fellow students and tutors – they've all been so nice."

Laurinda Brown, a Reader in the Graduate School of Education who worked with Peggy on her thesis, said: "What I am always struck by is her indomitable spirit forged in the nomadic historical movements of her family across Europe provoked by the world wars.

"There has never been any doubt in my mind that Peggy would finish this work of family history with reflections on differences in how women were educated, even though it took eight years. She is an inspirational woman and it's been a pleasure to work with her."