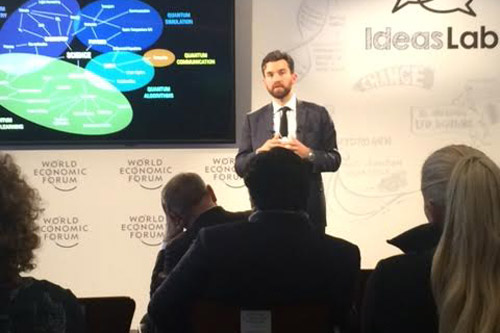 Imagine in 2025 that quantum computers, while relatively expensive, are reliable, hugely powerful and able to circumvent strong encryption up to 256 bits. How should business, government and civil society prepare for such a future?

These are just some of the questions and scenarios that Professor Jeremy O'Brien, Director of the Centre for Quantum Photonics at the University of Bristol, will be addressing when he talks today (Thursday, January 19) at the annual meeting of the World Economic Forum (WEF) in Davos, Switzerland.

Part of the European Research Council (ERC) Ideas Lab delegation, he will be addressing industrial and political leaders from across the world.

Professor O’Brien has been actively involved with the WEF over the past few years and recently took on the role of co-chair of the Global Future Council on Computing. Last year he presented a talk on working towards a quantum computer discussing the future of computing and how new fields of computer sciences are paving the way for the next digital revolution.

Quantum computing has the capability to unlock answers to some of humanity’s most pressing questions that are presently unsolvable with current computing technologies.

Professor O'Brien said: "Within a decade, quantum computers will begin to outperform everyday computers, leading to potential breakthroughs in artificial intelligence, the discovery of new pharmaceuticals and beyond.

"The very fast computing power given by quantum computers has the potential to disrupt traditional businesses and challenge our cyber-security. Businesses need to be ready for a quantum future because it’s coming."

As the holder of a prestigious Royal Academy of Engineering Chair in Quantum Engineering and an EPSRC RISE leader, Professor O'Brien has a ten year vision to engineer new quantum technologies that will inevitably disrupt todays ICT models, creating new businesses and valuable new markets.

He is currently developing ways to bring quantum computing into reality and the market to transform artificial intelligence, healthcare, energy, finance, cyber security and the internet. Using a photonic approach to manufacture a universal quantum computer in a silicon fab, exploiting silicon photonics developed for optical interconnects in the semiconductor industry.

The World Economic Forum (WEF) Annual Meeting of business and political leaders is taking place from this week in Davos, Switzerland.

Celebrating its tenth anniversary in 2017, the European Research Council (ERC) is the first funding organisation for excellent frontier research set up by the EU. Every year, it selects and funds the very best, creative researchers of any nationality and age to run five-year projects based in Europe. The ERC strives to attract top researchers from anywhere in the world to come to Europe.

To date, it has funded almost 7,000 top researchers at a variety of stages in their careers. Under the EU research and innovation programme, Horizon 2020, of which European Commissioner for Research, Science and Innovation Carlos Moedas is responsible, the ERC has a budget of over €13 billion. The ERC consists of an independent Scientific Council and an Executive Agency. The Scientific Council, the ERC’s governing body, is composed of distinguished scientists and scholars led by ERC President Prof Jean-Pierre Bourguignon. This is the fifth time that the ERC attends the World Economic Forum meeting in Davos, Switzerland.