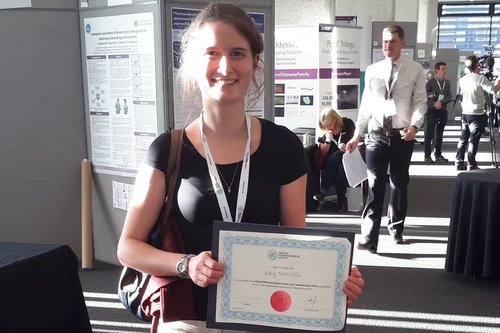 Katy Sutcliffe with her prize

Katy Sutcliffe, an SWBio DTP PhD student in the University of Bristol’s School of Physiology, Pharmacology and Neuroscience, and the School of Biochemistry (Faculty of Biomedical Sciences), has been awarded a British Pharmacological Society (BPS) Oral Communication Prize.

Katy received the award at Pharmacology 2016, the British Pharmacological Society’s conference, held in London in December. More than 1,000 scientists from around the world attend this annual meeting each year.

Katy’s talk was titled ‘Molecular dynamics simulations of the μ-opioid receptor reveal distinct binding poses of structurally similar ligands’. The talk addressed the molecular actions of clinically important drugs such as buprenorphine, which are key in the management of pain and drug abuse.