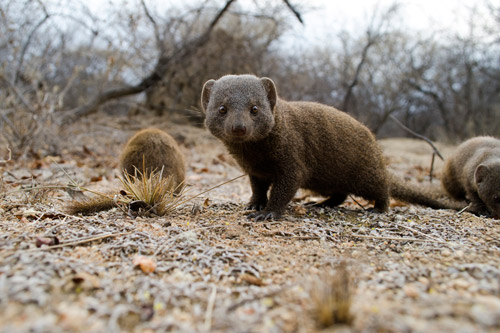 Research by scientists at the University of Bristol has found that man-made noise can hinder the response of animals to the warning signals given by other species, putting them at greater risk of death from predators.

Many animals are known to eavesdrop on the alarm calls of other species, effectively translating a foreign language to gather valuable information about the presence of predators. Using field-based experiments in South Africa, the researchers from the University's School of Biological Sciences, demonstrated that traffic noise reduces the likelihood of dwarf mongooses fleeing to the warning signals uttered by tree squirrels.

Lead author Amy Morris-Drake said: "The lack of an appropriate escape response could result from noise-induced distraction or stress. Alternatively, noisy conditions could partially mask the tree squirrel vocalisations, making it harder for the dwarf mongooses to extract the relevant information."

Co-lead author Anna Bracken added: "While lots of work has focussed on whether animals can adjust their vocalisations to avoid the effects of masking, it is often difficult to determine what that might mean for survival. By looking at responses to alarm calls, there is a direct link to survival; a lack of response could result in death."

The Bristol team studied the behaviour of wild dwarf mongoose groups who were so familiar with the researchers’ presence that they could walk within a few feet of them. Co-author Dr Julie Kern explained: “This habituation allows us to conduct ecologically relevant experiments in the mongooses’ natural habitat while collecting detailed and accurate information.”

Professor Andy Radford said: "We've known for a long time that noise from urbanisation, traffic and airports can detrimentally affect humans by causing stress, sleep deprivation, cardiac problems and slower learning. What’s becoming increasingly clear is that a lot of other species – mammals, birds, fish, insects and amphibians – are also impacted in all sorts of ways by man-made noise."

Amy Morris-Drake concluded: "Our study indicates the importance of considering the whole information network of a species when assessing impacts of noise pollution. By interfering with information-transfer between different species, as well as within the same species, man-made noise is likely to be a more extensive issue than previously thought."