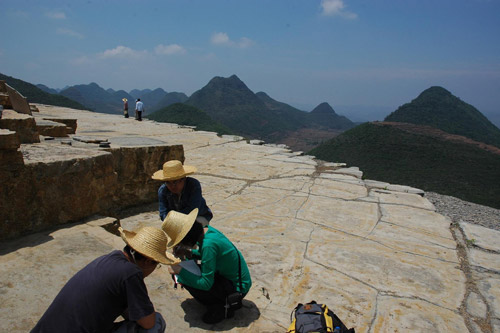 The University of Bristol has secured substantial funding in all three large grants recently awarded under an initiative to strengthen ties between the UK and China.

The funding reflects long and well-established links by Bristol palaeobiologists and palaeoclimatologists with their Chinese counterparts in the fields of dinosaurs, origin of life, mass extinctions, and climate change.

The Natural Environment Research Council (NERC), the UK government funding body that covers all aspects of environmental science, agreed to provide £4.5million as their contribution to a jointly funded scheme with the National Science Foundation of China (NSFC).

They offered three awards, each of approximately £1.5 million, to run for up to five years, and to cover costs of young researchers, field and laboratory work in both countries.

The key aim of the funding was 'to advance understanding of the evolution of the biosphere by integrating excellent palaeoscience (including palaeontology, geochemistry, geochronology and phylogenomics) and cutting edge modelling.'

The three successful proposals include one led from Bristol, and two with major Bristol components. The first, led by Professor Paul Valdes of the School of Geographical Sciences, 'The evolution of vegetation and biodiversity change during the Paleogene and early Neogene', is to explore the climates and vegetation of the Earth during the past 66 million years of cooling climates.

Professor Valdes said: "This is a really exciting opportunity to understand how parts of China became biodiversity hotspots in the past, and how these might change in the future. Through the use of fossils, bioclimatic indicators, and complex climate models we hope to unravel some of the underlying feedbacks and interactions between the changing ecology and climate."

Stepping back in time, the second award is to explore 'Ecosystem resilience and recovery from the Permo-Triassic crisis'. This crisis was the largest ever mass extinction, which occurred 252 million years ago and experienced a loss of more than 9 percent of species on Earth. This project is led from the University of Leeds, and Bristol is the second collaborator.

Professor Mike Benton of the School of Earth Sciences in Bristol, said: "We've been collaborating with Chinese colleagues to explore this event for more than twenty years and we look forward to exploring the environmental changes and consequences for life. In particular we want to know how life can recover from such devastation."

The third project steps back even further in time, some 600–500 million years ago, to explore 'Perturbation of the Earth System at the Proterozoic-Phanerozoic transition and the resilience of the biosphere'. The project explores a time when the Earth’s atmospheres and oceans were very different from today, and the crucial time when modern groups of animals first emerged. The project is led from University College London, and Bristol is again the major partner.

Professor Phil Donoghue of the School of Earth Sciences in Bristol, added: "This is a fantastic opportunity to bring together Chinese and UK experts from diverse branches of science, from genetics to geochemistry, to reveal how animal life and its environment co-evolved over half a billion years ago, laying the foundations of the modern biosphere."

Professor Daniela Schmidt, Director of Research for the Faculty of Science, said: "This is a great achievement for the University of Bristol. It’s unusual for one university to secure the majority of funding from a specialist funding call such as this. We are delighted about these new opportunities to foster bright young researchers and to further develop our international research links with China."