Brain’s connections which keep related memories distinct from each other, identified in new study 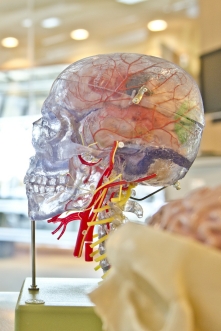 Neuroscientists at the University of Bristol are a step closer to understanding how the connections in our brain which control our episodic memory work in sync to make some memories stronger than others. The findings, published in Nature Neuroscience, reveal a previously unsuspected division of memory function in the pathways between two areas of the brain, and suggest that certain subnetworks within the brain work separately, to enhance the distinctiveness of memories.

The team studied the hippocampus and prefrontal cortex — two regions of the brain critical to memory function — as damage in these areas can induce severe memory loss.

Both areas are connected by a complex network of direct and indirect pathways, and the challenge has been until now, how to identify the precise routes through which these brain regions interact in memory formation.

Researchers from Bristol’s Schools of Physiology, Pharmacology and Neuroscience and Clinical Sciences used a new novel pharmacogenetic technique to deactivate specific neural pathways from the hippocampus to the prefrontal cortex in rats. They then tested the rats’ memory for objects presented at specific points in time, and in specific locations, to model episodic memory function’ in humans.

The team found that one pathway from the hippocampus controlled the ‘temporal’ aspects of the memory such as those which enable a subject to remember when they had encountered an object, while a separate pathway enabled subjects to remember an object’s location.

They found that by deactivating specific neural pathways and preventing the hippocampus from talking to the prefrontal cortex, episodic memory function was significantly disrupted.

Professor Clea Warburton from Bristol’s School of Physiology, Pharmacology and Neuroscience said: “Episodic memory stores an individual’s unique recollection of a specific event and is important for remembering significant events in our lives. This type of integrated memory is important in helping us to remember significant events in our lives, and works by linking different types of information.

“For example, even remembering routine things such as where we parked the car requires our brain to store and link different types of information.  We must remember what kind of car we have, when, and where we parked it. Linking these different components of memory depends on clear communication between different brain regions which work together forming complex memory networks.

“These findings, reveal for the first time, an important aspect of memory function critical to episodic memory and could help with developing new therapeutics to aid memory loss.”

The work was funded by the Biotechnology and Biological Sciences Research Council (BBSRC).

The Biotechnology and Biological Sciences Research Council (BBSRC) invests in world-class bioscience research and training on behalf of the UK public. Our aim is to further scientific knowledge, to promote economic growth, wealth and job creation and to improve quality of life in the UK and beyond.

Funded by Government, BBSRC invested over £473M in world-class bioscience, people and research infrastructure in 2015-16. The BBSRC supports around 1600 scientists and 2000 research students in universities and institutes across the UK.

For more information about BBSRC, our science and our impact see: http://www.bbsrc.ac.uk