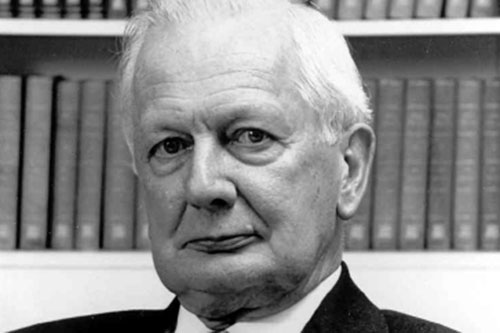 Robert G (Bob) Chambers, Professor of Physics and Professor Emeritus in the School of Physics, died in Southmead Hospital on December 17, 2016 with complications following a fall. His former colleagues and friends Professors Emeriti Bob Evans and Mike Springford offer a remembrance.

Bob Chambers was a distinguished solid state physicist and a pivotal figure in the University of Bristol, serving as Dean (twice) and as Pro Vice-Chancellor.

Bob studied physics in Cambridge, graduating in 1944. He worked as an experimental officer at the Tank Armament Research Establishment and then at the Electrical Research Association before returning to Cambridge. Working closely with two giants in experimental solid state physics, David Shoenberg FRS and Brian Pippard FRS, he completed his PhD in 1951. Bob’s continuing research at Cambridge addressed, theoretically and experimentally, the electronic properties of metals at low temperatures; his papers on the anomalous skin effect, cyclotron resonance and magnetoresistance, as well as his contributions to scattering theory, made considerable impact.

Bristol made the wise move of recruiting Bob, in 1958, to a Senior Lectureship, specifically to head up the Low Temperature Physics Group. In 1961 Bob was promoted to Reader, probably on the strength of his ingenious, and technically challenging, experiment that demonstrated what is now known as the AB effect. In 1959 the theorists Yakir Aharonov and David Bohm, working in Bristol, had argued that the (rather abstract) notion of the magnetic vector potential was something that had real physical import when viewed from a quantum mechanical perspective (Today this work is recognized as being of crucial importance in the development of quantum physics). Bob took up the challenge of testing the AB predictions and within a year had performed his landmark experiment. His 1960 paper continues to be cited in textbooks. He was awarded the Royal Society Hughes Medal in 1994 for this work and for his fundamental contributions to understanding electrons in metals.

In the 1960s new appointees were informed (using modern parlance): ‘Bob Chambers is the smartest person in Bristol Physics’. Colleagues and students appreciated Bob’s intellect, meaning they were scared of him; the wiser saw the warmth behind the piercing eyes. In 1963 John Ziman, working in Cambridge, wrote a graduate textbook, later to become required reading by all in the discipline, entitled Principles of the Theory of Solids. Ziman, an eminent theorist, moved to Bristol in the same year. Chambers, an experimentalist, presented Ziman with a detailed list of errors/corrections. Bob’s review of the book, published in Nature, is an interesting read. The second edition was better.

By the late 1960s Bob had turned his attention to the wider University, its administration and its governance. Senior colleagues might recall the turbulent years of the late sixties; these included an 11-day student occupation of Senate House in December 1968. Bob was a wise, calming voice throughout this period. He produced an unofficial news-sheet at the height of the ‘problems’. This was the first attempt to address the serious issue of (poor) communication across the University. The ‘sheet’ morphed into the University Newsletter. What did happen to the Newsletter?

The same colleagues will also recall the Thatcher years and severe cuts to university funding. Bob served as the primary opposition to the proposals, which were drawn up in 1981 by Vice-Chancellor Alec Merrison under extreme pressure to make savings, to close parts of the University. The debates in Senate were remarkable for their passion and for the intellectual level. Alec and Bob remained good friends. Bob served as Dean of Science in the periods 1973-6 and 1985-8 and as Pro Vice-Chancellor in 1978-81. His enormous contributions to the University of Bristol were recognized by his award, in 1994, of an Honorary Fellowship, the University’s highest honour.

Bob’s contributions to UK science and its administration were substantial. In 1987, Bob became Chairman of the Standing Conference of Physics Professors (SCPP), a role that enabled him to tackle another problem that had long concerned him: the overloading of the physics teaching curriculum. He set up a working party, including members of the Institute of Physics and other bodies, which agreed that the solution was an optional fourth year of study, leading to a degree called MPhys or MSci. The introduction of the new degree was led by Bristol Physics but it was soon taken up by other science disciplines.

After his retirement in 1990, Bob’s wisdom and his knowledge of the workings of the University proved invaluable to both of us during our periods as Head of Department.

Bob Chambers was a remarkable servant of the University of Bristol.

We offer our condolences to Bob’s wife, Sue and his daughter, Alyssia.

A memorial event, celebrating Bob’s life and his contributions to science and the University, will take place at 16.00 on Wednesday 8 February 2017 in the Frank Theatre, School of Physics. All who knew Bob are welcome to attend.