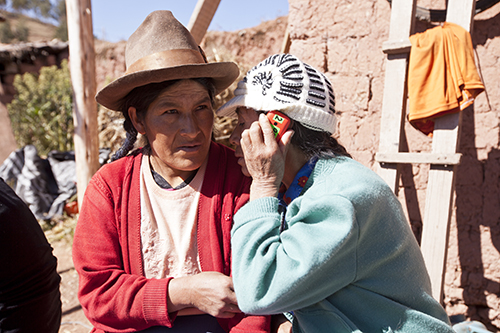 'Esperanza and Teodula were sterilised without consent more than 18 years ago. They are still searching for justice in Quipu, Peru.’

University of Bristol research has inspired a short documentary produced by The Guardian in which Peruvian women, sterilised against their will in the 1990s, share personal testimonials with a global audience.

The film, launched today [10 February 2017] tells the story of Esperanza and Teodula, just two of the 300, 000 Peruvians affected by the Programa Nacional de Población, the family planning programme promoted by Alberto Fujimori’s government in the 1990s. The programme targeted impoverished, rural, indigenous people and, despite several attempts to bring those responsible to justice, the crime of the unconsented sterilisations remains unpunished.

The film documents how Esperanza and her local women's organisation shared their stories with the world using a specially developed phone line connected to the internet. The phone line enabled the women to reach international audiences for the first time, sharing their personal histories in their own words. These testimonies can be listened to online.

Professor Matthew Brown, Principal Investigator on the project said:  “We are delighted that this has been captured by The Guardian in one of its documentaries. The testimonies collected by the Quipu Project have already been listened to by audiences in more than 100 countries globally. The Guardian film, directed by our colleagues Rosemarie Lerner and Maria Court, will take the women’s testimonies to a yet wider global audience and bring much needed publicity to their continued fight for justice.”

The film’s directors, Rosemarie Lerner and Maria Court, are now Research Associates at the University of Bristol as part of an AHRC-funded research project Tying Quipu’s Key Knots, led by Professor Brown from the Department of Hispanic, Portuguese and Latin American Studies in the School of Modern Languages, with Dr Karen Tucker from the School of Sociology, Politics and International Studies. The original Quipu Project website was designed and produced as part of the AHRC’s REACT programme, a four-year project which connected academia and business. Full credits for the project are available.