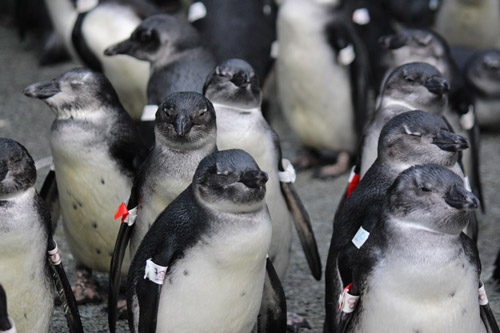 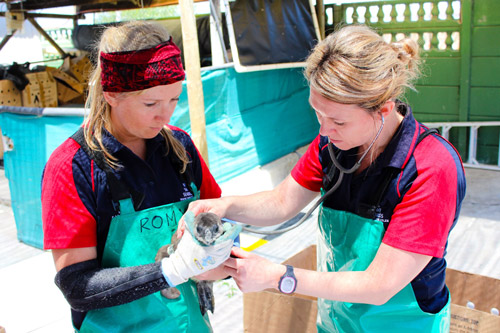 The first model of its kind which provides guidance on the survival likelihood of abandoned penguin chicks admitted to rehabilitation has been developed by researchers from the Universities of Bristol, Exeter, Cape Town, the Southern African Foundation for the Conservation of Coastal Birds (SANCCOB) and Bristol Zoological Society.

Globally the use of rehabilitation for conservation is growing, with many research papers monitoring the success of individuals post-release. Rearing chicks that are unlikely to survive naturally has the potential to significantly contribute to the conservation of threatened bird species, such as the African penguin.

Annually, abandoned African penguin chicks are hand-reared by SANCCOB and released back into the wild. The chicks are abandoned if the adults start to moult before the chick fledges.

Once an adult begins to moult it is no longer waterproof, so can no longer feed its chick. A scarcity of prey leads to slow growth rates and can cause chicks not to fledge in time. Abandoned chicks would not survive without intervention.

This 'chick bolstering project' is an important conservation action for these endangered birds. It aims to bolster the African penguin population while methods to establish new colonies near high prey abundance are developed.

Decisions of whether and when to remove animals from the wild rarely use quantitative criteria. Where such criteria are assessed, there have been few studies to investigate their efficacy to predict rehabilitation outcomes.

In this new study, published today in Animal Conservation, researchers investigate whether a body condition index (mass correcting for structural size), other structural measurements and sex can predict rehabilitation outcome.

Joanne Morten from the University of Bristol's School of Biological Sciences, was lead author of the research.

She said: "Using data from over 1,400 chicks rescued over six breeding seasons, we identified clear body condition thresholds that colony managers can use to prioritise the removal of chicks.

"These thresholds also allow the rehabilitators to rapidly identify individuals in need of critical attention."

Joanne added: "However, almost a third of chicks admitted may well have survived naturally. Hand-reared African penguin chicks are just as successful as their naturally-reared counterparts, but we don’t want to cause undue stress and use resources unnecessarily. The body condition thresholds identified in this study can be used to guide future management strategies, and can be rapidly incorporated.

"This is an extremely useful guide which, when used in conjunction with nest monitoring, can effectively identify chicks that have been abandoned. This tool could be useful, not just to the endangered African penguin, but other species where chicks can be successfully hand-reared."