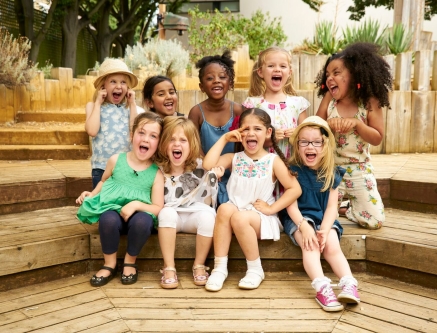 Professor Paul Howard-Jones from the University of Bristol will feature in the return of a popular Bafta award-nominated series broadcast this week [2 Feb] which explores the differences between boys and girls in a new intake of fascinating five-year-olds.

The new series will explore the difference between boys and girls, seeing how they interact with each other, how their sense of gender roles is ingrained at such a young age, and whether there is a marked difference in their behaviour.

Professor Howard-Jones from Bristol’s Graduate School of Education, said: “Same toys, same tasks, same treats. So we’re interested in the difference in how boys and girls behave, but we are also looking for clues as to why those differences exist.

“As the social experiment unfolds, it becomes apparent that even by the tender age of five, girls and boys are wired differently — the former proving to have more empathy and be better at managing temptation while also being more risk averse than boys. It also becomes clear that despite their tender years, gender stereotypes begin to develop.”

In the first episode, the boys and girls are observed separately to see how their gender affects how they react to the same environment and circumstances in identical experiment.  Will they choose to take the same risks in a penalty shoot-out? And how do boys really think girls run?

Professor Jones added: "What I've found really fascinating about working on these particular films is how the children start constructing their own "gendered" culture. This is often a strange mixture of ideas from the adult world, observations they make about each other but also a sense of self-promotion. For one thing, the girls outperform boys on so many measures at this young age and yet, even at five-years-old, the boys are working hard at promoting their own superiority. I think the importance of mixed groups, as means for children to authentically explore and understand differences in sex and gender comes over quite strongly."

The Secret Life of 5-year-olds is on Channel 4 on Thursday 2 February at 8 pm.