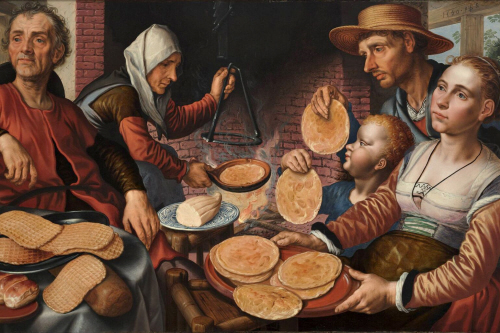 The traditions of Shrove Tuesday, dating back to Tudor times, will be brought to life at a special event in Easton next week.

Although pancake eating formed an important part of the celebrations before the fasting season of Lent began, our ancestors would also indulge in jousting, plays, football, and general merry making.

The public are invited to a free event at Easton Community Centre on Tuesday (28 February), from 2.30pm to 5.30pm, where the rich history of Shrove Tuesday will be recreated for a 21st century audience by researchers at the University of Bristol.

There will also be a pop-up exhibit on medieval and Renaissance Shrove Tuesday customs. These include feasting, dancing, football, plays, masques, jousts, and more sinister traditions like the Shrovetide riots of London and Bristol.

The event has been organised by PhD student Taylor Aucoin, who will be sharing his latest research into the festival and the customs associated with it in medieval and renaissance Britain.

Taylor said: "Shrove Tuesday, or Pancake Day as it's commonly known, was one of the biggest festivals of the year. On the day before the fasting season of Lent began, a 'pancake bell' would ring, calling people to leave work behind and eat, drink and make merry on a grand scale.

"These merry men and women spent their holiday observing an eclectic mix of customs ranging from pancake-eating and jousting, to mob football and rioting.

"We hope lots of people will join us on Tuesday as we explore what the festival meant to our ancestors and how they made use of these traditions with a smorgasbord of fun activities."

The event is part of the Past Matters Festival of History, organised by the University of Bristol's Department of History, to bring together academic historians, students, community groups, and the public to discuss and debate the place of history in contemporary society.

More information on 'A Very Tudor Pancake Day' is available on the event's Facebook page.