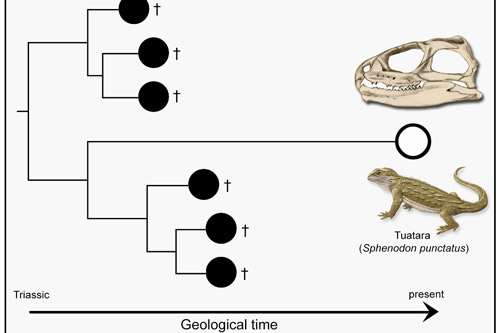 The living tuatara tracks back to the Triassic, over 200 million years ago, and shows little change from that time Tom Stubbs/University of Bristol

A team of researchers from the University of Bristol studying the ‘living fossil’ Sphenodon - or tuatara - have identified a new way to measure the evolutionary rate of these enigmatic creatures, giving credence to Darwin’s theory of ‘living fossils’.

The tuatara is a relatively large lizard-like animal that once lived on the main islands of New Zealand but has been pushed to smaller, offshore islands by human activity. Tuataras are not lizards, although they share a common ancestor from about 240 million years ago, and have survived as an independent evolutionary line for all that time.

The study confirms two key points: the tuatara has shown very slow evolution, as expected, and importantly, its anatomy is very conservative.

Lead author, PhD student, Jorge Herrera-Flores, said: "The fossil relatives of the tuatara included plant eaters and even aquatic forms, and were much more diverse than today. We found the living tuatara shares most in common with its oldest relatives from the Triassic."

When Charles Darwin invented the term 'living fossils' in 1859, he was thinking of living species that look just like their ancestors of millions of years ago. His explanation was they occupied small parts of the world, escaping competition, and therefore did not change.

"Many biologists do not like the term 'living fossil' because they say it is too vague. However, we have presented a clear, computational way to measure evolutionary rate. More importantly, we discovered a second fact about the living tuatara: its adaptations are central among all its fossil relatives. We can truly say that, numerically, the tuatara is conservative and just like its relatives from over 200 million years ago,” said Mike Benton, Professor of Vertebrate Palaeontology and Head of School of Biological Sciences at the University of Bristol and co-author of the report.

"We are with Darwin – we now have a numerical test of what is, and what is not, a living fossil. Importantly, these tests can be applied to other classic examples," said Professor Benton.

‘Macroevolutionary patterns in Rhynchocephalia: is the tuatara (Sphenodon punctatus) a living fossil?’ by J.A Herrera-Flores, T.L Stubbs and M.J Benton in Palaeontology