Joshua Greenidge with his award 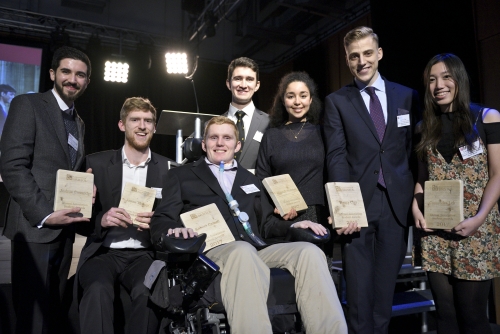 Having left school at 13 with no qualifications and a reading age of seven, Joshua Greenidge thought a university education was beyond his reach – until he saw a YouTube video about an access course at the University of Bristol.

The 28-year-old, originally from Devon, struggled at school due to his dyslexia and was home schooled throughout his teenage years, eventually teaching himself to read and write.

Josh learnt to love reading and learning, but with no GCSEs or A-Levels he found his education limited to lectures on YouTube.

Now, thanks to stumbling across a video about the Foundation Year in Arts and Humanities at the University of Bristol, he’s sitting in real lecture theatres and his achievements are winning accolades.

Josh is one of seven students at the University to win an Alumni Association Student Award, with each winner receiving £500 in recognition of overcoming personal adversity or making an outstanding contribution to the University or community. They were presented with their awards at a special ceremony held in the Richmond Building, home of the University of Bristol Students’ Union (Bristol SU).

The Foundation Year in Arts and Humanities is a unique year-long introductory course designed to prepare students for an undergraduate degree.

Ninety percent of those taking part in the programme have no A-levels and a high number of participants come from groups under-represented in higher education – many are the first in their family to attend university.

Josh completed the course with a 2.1 and is now studying for an undergraduate degree in Anthropology with Innovation – a new programme merging traditional subjects with the opportunity to learn how to become an entrepreneur and innovator.

He said: “I’ve always been hungry to learn but didn’t have GCSEs or A-levels so I ended up doing various unfulfilling jobs until I was 26. I struggled so much to read when I was younger but really enjoyed it at the same time. I stumbled across a video about the Foundation Year in Arts and Humanities by chance but looked into it and it sounded perfect for me.

“The Foundation Year in Arts and Humanities really is an amazing programme. Not having a record of doing well academically, it was really daunting and I didn’t know what to expect. But the University was really welcoming, and everybody was just really nice. I knew that I wanted to stay on as long as possible.”

In addition to studying, Josh has established the Bristol Entrepreneurs Society which is now working towards becoming one of the largest societies on campus, with 33 events planned for the year.

He also works with the University’s Careers Service to promote internships by writing blog posts to share knowledge with first year students entering the University, and by speaking about his own experiences at events.

Josh added: “In my very first week, I went straight to the Careers Service to find out what opportunities there were. Being a mature student makes you grasp everything on offer. I applied to Bristol knowing that I wanted to immerse myself in the entrepreneurial ecosystem that the city has the offer, but I didn't expect the community to be so welcoming, or for there to be so many opportunities.

“When I look at what I’m doing now, it’s a big difference to what people said I would be able to do when I left school. That’s thanks to the Foundation Year in Arts and Humanities allowing me to move onto the next stage; it really is an amazing programme and I would encourage anyone in a similar situation to apply.”

Information on the other Alumni Association Student Award winners:

Cassandra Lek
Cassandra, studying BSc Neuroscience, has been faced with significant obstacles: in her family, her health, her studies and her financial circumstances, which many would have found unsurpassable. Through enormous personal drive and determination, not only has she overcome these problems to achieve success, but has also made significant contributions to the life of others in her community and in the University.

James Throup
James has had a demonstrable impact by creating the Bristol Mechanical Engineering Society, captaining the Men’s’ First Basketball Team, and running shows at the Edinburgh Fringe, volunteering with Bristol Hubs, coaching basketball in local schools, and volunteering with Pitstop. He also raised substantial funds with Bristol Volunteers. All this despite significant personal difficulties, due to ill health, resulting in five months in intensive care and the postponement of the 2nd and 4th years of his Engineering degree.

Henry Clay
Henry has demonstrated phenomenal determination, humility, intelligence and charm in the face of failing health resulting from autoimmune disease targeting his liver. Henry refused to be treated differently to other students while in university. He studied for his final year in Biochemistry from his hospital bed, while waiting to hear of a liver transplant. Henry finished his exams this autumn and has achieved exceptionally high results. He had his liver transplant in February in the middle of his studies. He is now completely healthy and studying medicine.

Robert Camm
In 2013, just before starting university, Robert was in a serious car crash which resulted in his being paralysed from the neck down. As a tetraplegic Robert relies on a motorised car, uses voice recognition software to write essays and a system called Smartnav to control a computer mouse using head movements. Robert joined the Law Club and has been on several work experience placements. He achieved a first class honours degree in Law and graduated last summer.

John Gilbert
In order to better understand the mental health issues particular to medical, dental and veterinary science students, Medical student John led the development of a Faculty-wide survey which has had a phenomenal response from the students. As a result, the University has committed to funding a research studentship to analyse the data, and assess the impact of interventions. John’s work will help shape the overall educational environment and mental health support for students, within the Faculty and more widely, with positive impacts on the student experience.

Hannah Haddad
Hannah’s energy, drive and dynamism have had broad and diverse impacts. The Geography student created Match4Lara, in response to the diagnosis of a Bristol Alumna, with leukaemia; started In the Know, to support digital services for small businesses in Bristol; set up a partnership between Bristol Geography department and Hong Kong University; transformed the life of many migrant workers in Hong Kong, ran a TEDx event in Bristol, as well as participating in Dramsoc, Spotlights, Nightline and telephone fundraising. At the same time, she consistently achieves academic excellence.

“This year, because the quality of nominations was so high, we have made seven awards rather than the normal four, which is testament to the wonderful achievements and hard work of the students we’re celebrating.”