Migrant deaths are ‘vastly under-reported’ according to new report 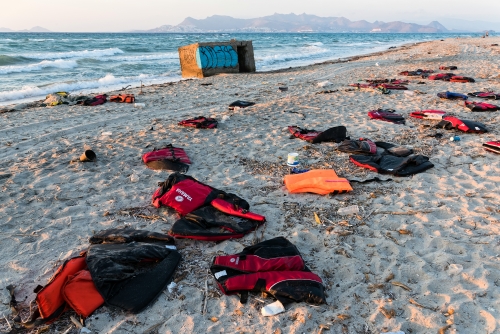 Abandoned life jackets of refugees on a beach in Kos, Greece

The majority of migrant deaths are unrecorded, according to a new report which calls for ‘significant improvements’ to be made in order to capture the true number of deaths which occur during migration worldwide.

The report, the second part of Fatal Journeys Volume 3: Improving data on missing migrants from the International Organization for Migration (IOM) and co-edited by University of Bristol academic Ann Singleton, comes just days after the US pulled out of the United Nations’ global compact on migration.

This move is seen to present a further challenge to the global policy community in making progress towards achieving the UN's sustainable development goals, in particular target 10.7 to 'facilitate orderly, safe, and responsible migration and mobility of people, including through implementation of planned and well-managed migration policies'.

The report also follows a series of deadly incidents in seas and on land, including in the Mediterranean and at the border of Bangladesh from neighbouring Myanmar.

More than 500,000 people have fled their homes in Myanmar, with thousands attempting to reach Bangladesh by boat across the Andaman Sea.

While official figures show 233 people died trying to cross the border between 1 January 2014 and 8 October 2017, researchers believe the number could be significantly higher. The UN Refugee Agency (UNHCR) predict up to 2,000 migrants may have died in the Bay of Bengal alone between 2012 and 2016.

The Mediterranean crossings, which have claimed the lives of 15,000 migrants since it hit the headlines in October 2013, are just one example of the many migration routes that see numerous fatalities each year.

While the dangerous journeys of migrants travelling across the Mediterranean Sea en route to Europe have been widely reported, there is little public or policy awareness of the risks migrants encounter before they reach the coast of Turkey.

Overall, the report found that the deaths of migrant women and children are underrepresented in the available data. Basic information such as the sex or the age of the migrant who is reported dead or missing is often lacking.

Ann Singleton, Senior Research Fellow in School for Policy Studies at the University of Bristol, said: "The report on global regions makes it evident that the number of migrants who die across the world continues to be vastly under-reported. In many remote regions of the world, bodies may never be found, and many migrants may never be identified. Each nameless death represents a family missing a loved one.

"The many challenges specific to each region mean that data on migrant deaths may never be complete, however significant improvements could be made across the world. There are many potential sources of data and approaches that could be taken. The challenge is not simply a lack of data, but the unwillingness of some authorities to collect them, as well as deficiencies in resources and know-how."

Comprehensive data on migrant fatalities will remain a challenge without more commitment of resources from local, national and international authorities the researchers conclude.

Fatal Journeys 3 makes five key recommendations based on the innovative methodologies discussed in part one, and the regional comparisons made in part two of the report:

1. Make better use of administrative data

Local, national and regional authorities should collect and publish data on migrant deaths and disappearances. These authorities should standardize collection procedures and methodologies so that the data might be more easily compared.

In areas where few official data exist, survey-based data collection should include collecting eyewitness testimonies from migrants who have witnessed the deaths of their peers.

New and emerging data collection techniques and sources, such as big data, can improve the quality and coverage of data on missing migrants.

4. Work with civil society and families

The needs of families of missing migrants should be considered at all stages of data collection and processing of deceased migrants. Families and civil society groups can provide key information to aid the identification of migrants who have died or gone missing.