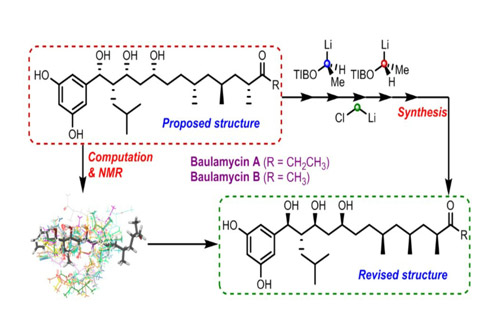 The image shows the original and revised structure of baulamycin and how the combination of synthesis and NMR/computation were used to deduce the correct structure. University of Bristol

Chemists from the University of Bristol have revised the structure of baulamycins A and B by combining chemical synthesis, computational modelling and Nuclear Magnetic Resonance (NMR) spectroscopy.

In 2014, a team from Michigan University discovered two molecules, baulamycins A and B, from the coast of Costa Rica that were very active against anthrax and superbug MRSA.

Both molecules were collected in very small amounts so their three-dimensional structures could not be determined through the normally used method of chemical derivatisation and analysis.

Instead the 3D structure, which control their biological activities, were determined using NMR spectroscopy alone.

Because both molecules are promising antibiotic candidates, the University of Bristol's School of Chemistry, developed an extremely efficient and flexible 10-step method to produce the proposed structures.

Varinder Aggarwal, Lead researcher and Professor in Synthetic Chemistry, said: "Unfortunately, the synthetic molecules did not match the isolated molecules meaning that the team from Michigan had assigned the wrong structure.

"These types of 'mis-assignments' are unfortunately quite common and highlight the limitations of current non-destructive methods for structure determination, as used by the team from Michigan."

The Aggarwal group were then faced with the daunting problem of which of the 128 possible structures represented the baulamycins.

To solve this problem, they teamed up with the Butts group, also at Bristol's School of Chemistry, who brought expertise with NMR spectroscopy and computation.

The team eliminated 120 out of 128 possible structures by using a unique and powerful combination of computational modelling and NMR spectroscopy, and pinned down the final structure with synthesis.

The method described could be applied to other molecules for the rapid identification of their three-dimensional structures.