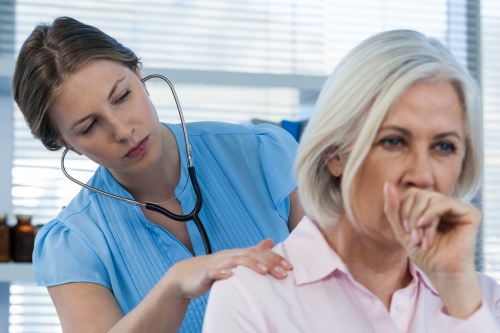 Oral steroids should not be used for treating acute lower respiratory tract infection (or ‘chest infections’) in adults who don’t have asthma or other chronic lung disease, as they do not reduce the duration or severity of symptoms, according to a new study published in the journal JAMA [22 August].

In the study, carried out by researchers at the Universities of Bristol, Nottingham, Oxford and Southampton, 398 non-asthmatic adults with acute chest infections − but no evidence of pneumonia and not requiring immediate antibiotic treatment − were randomly split into two groups, one receiving 40mg of the oral steroid ‘prednisolone’ for five days (198 participants) and one receiving an identical placebo over the same time period (200 participants).

The team found there was no reduction in the duration of cough, the main symptom of chest infections, or the severity of the accompanying symptoms between two and four days after treatment (when symptoms are usually at their most severe) in the prednisolone group compared with the placebo group. The results suggest that steroids are not effective in the treatment of chest infections in non-asthmatic adult patients.

Alastair Hay, a GP and Professor of Primary Care in the Bristol Medical School at the University of Bristol and lead author, said: "Chest infections are one of the most common problems in primary care and often treated inappropriately with antibiotics. Corticosteroids, like prednisolone, are increasingly being used to try to reduce the symptoms of chest infections, but without sufficient evidence. Our study does not support the continued use of steroids as they do not have a clinically useful effect on symptom duration or severity. We would not recommend their use for this group of patients."

Professor Mike Moore, a study co-author from the University of Southampton, added: "Oral and inhaled steroids are known to be highly effective in treating acute asthma as well as infective flares of other long-term lung conditions but need to be used carefully because of the risk of unwanted side effects. We chose to test the effect of steroids for chest infections as some of the symptoms of chest infections, such as shortness of breath, wheeze and cough with phlegm, overlap with acute asthma. However, we have conclusively demonstrated they are not effective in this group of patients."

The research was funded by the National Institute for Health Research (NIHR) School for Primary Care Research.

About the NIHR
The National Institute for Health Research (NIHR): improving the health and wealth of the nation through research. Established by the Department of Health, the NIHR:

About the University of Southampton
The University of Southampton drives original thinking, turns knowledge into action and impact, and creates solutions to the world’s challenges. We are among the top one per cent of institutions globally. Our academics are leaders in their fields, forging links with high-profile international businesses and organisations, and inspiring a 24,000-strong community of exceptional students, from over 135 countries worldwide. Through our high-quality education, the University helps students on a journey of discovery to realise their potential and join our global network of over 200,000 alumni.