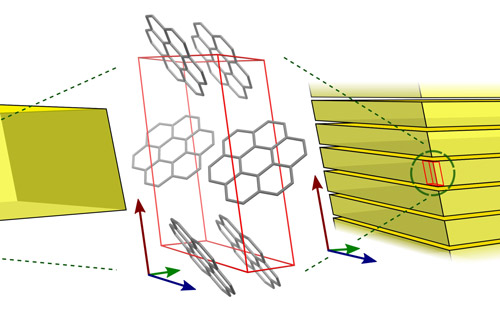 Schematic showing the non-layered crystal structure of synthetic coronene (left) and the layered structure of natural karpatite (right). Both structures were determined through X-Ray crystallography (centre) and electron microscopy. University of Bristol

A decades-old mystery of why a naturally-occurring organic crystal fluoresces blue under ultra-violet light, yet when grown under laboratory conditions fluoresces with an intense green colour, has been solved by scientists from the University of Bristol.

The colour of crystals is a function of their atomic structure. In the case of organic crystals, it is the spatial relationships between molecules that determine the colour, so the same molecules in the same arrangement should produce crystals of the same colour, regardless of whether they arise geologically or synthetically.

There is a naturally-occurring organic crystal known as karpatite which is prized for its beautiful blue fluorescence under ultra-violet illumination.

When grown under laboratory conditions however, the crystals fluoresce with an intense green colour.

For 20 years, this difference has been thought to be due to chemical impurities in the laboratory-grown material.

Using electron microscopy coupled with fluorescence spectroscopy and X-Ray diffraction, Dr Simon Hall, Jason Potticary  from the Bristol Centre for Functional Nanomaterials CDT and Torsten Jensen from the Centre for Doctoral Training in Condensed Matter Physics in the School of Chemistry found that this disparity is instead due to differences in the structure of the crystals at the nanoscale.

Their results show that in nature, karpatite has a nanotexture that is not present in the synthetic crystals, which enables different photonic pathways and therefore a blue, rather than green colour whilst undergoing fluorescence.

Dr Hall said: "As this study proves that colour change in organic crystals can be a solid-state morphological phenomenon, we believe that our interrogative method can be applied to many other organic crystal systems to potentially uncover exotic charge transfer pathways in semiconductors, field-effect transistors and organic superconductors."

‘Nanostructural origin of blue fluorescence in the mineral karpatite’ by J. Potticary, T. Jensen and S. Hall in Scientific Reports