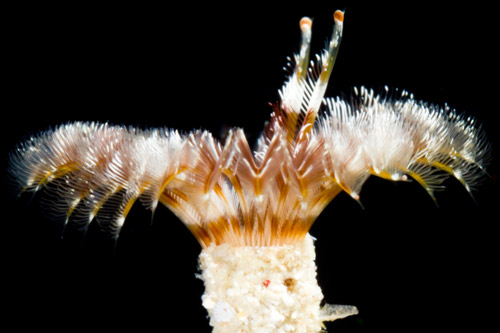 A fan worm projecting its fan-like array of feeding tentacles up out of its tube into the water column. Two enlarged tentacles are tipped with a pair of prominent compound eyes. Michael Bok 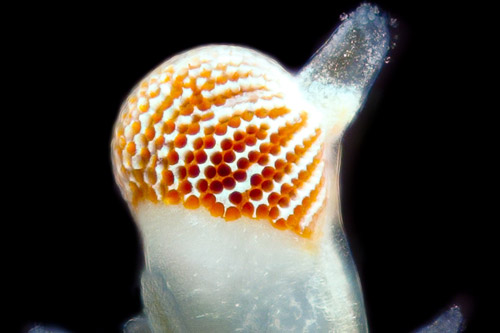 Micrograph of one of these compound eyes. The eye is 250 microns in diameter. Michael Bok

Scientists examining the multiple eyes found on the tentacles of fan worms have discovered they evolved independently from their other visual systems, specifically to support the needs of their lifestyle.

Fan worms live in tubes on the seafloor. From their heads, the worms extend feather-like tentacles up out of their tubes to sift the water for food particles and aid in respiration.

To protect themselves from predators, fan worms have evolved a variety of unusual compound eyes on their tentacles that act like shadow or motion detectors, alerting the worm to danger and triggering a rapid hiding response to encroaching objects in the water.

Superficially, some of these eyes resemble those of crustaceans or insects, but their photoreceptor cells are structurally and functionally distinct.

Researchers from Lund University in Sweden used transcriptomic sequencing to examine the genes expressed in these eyes from a species of fan worm collected on the Great Barrier Reef, Megalomma interrupta.

This sequencing approach identifies nearly all gene transcripts expressed in a given piece of tissue.  They identified a number of genes that produce light-sensitive cellular signalling components such as opsins and g-proteins in the fan worm’s eyes, which they compared with others known from across the animal kingdom.

The findings were published last week in the journal Current Biology.

Lead author Dr Michael Bok, Senior Research Associate at the University of Bristol's Ecology of Vision Group – part of the School of Biological Sciences, said: "Surprisingly, we found an unusual set of light-sensing genes, previously only seen in simple photoreceptors in the brains of some invertebrates.

"It seems that the eyes on the tentacles of fan worms evolved independently from all other visual systems in order to support the needs of their unusual filter-feeding lifestyle.

"Many questions remain about the evolution and function of these eyes.

"Due to their unique evolutionary history and neural circuitry these eyes could offer many clues about the emergence of new sensory systems and how the first eyes may have arisen."