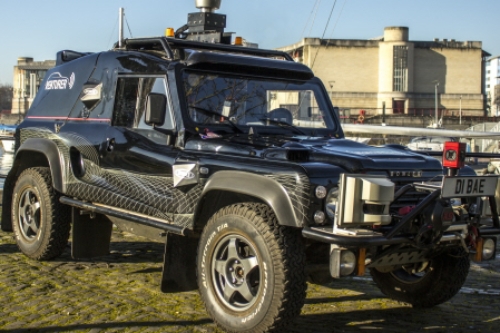 The latest driverless vehicle technology will be on show for the public to experience for free at a science festival in Bristol this weekend.

Bristol City Council and Bristol Robotics Laboratory (BRL), a collaborative partnership between the University of Bristol and the University of West of England (UWE Bristol), will be joining the 'Festival of What If', run by At-Bristol Science Centre, from Friday 4 to Sunday 6 August in Millennium Square, to showcase the latest technology developed by the VENTURER and GATEway projects.

The 'Festival of What If' is a six-week celebration of what it is to be curious, split into three fortnights based around a different ‘What If’ question. Aspects of the VENTURER autonomous car project will be showcased as part of the question ‘What if we had to live on another planet?’.

The events will focus on the future of transport and represents a first for the VENTURER consortium, led by Atkins, as it partners with the GATEway (Greenwich Automated Transport Environment) project led by TRL and funded by government and industry.

Lee Woodcock, Global Product Director – Intelligent Mobility at Atkins, lead of the consortium said: "The VENTURER consortium has been running for just over two years now and we are very excited to be sharing some of our findings with the people of Bristol. In particular we are pleased to be collaborating with the GATEway project to showcase their driverless pod at this event. We are sure that the event will help encourage everyone to become more interested in what the future of transport holds for them."

The outdoor event will introduce members of the public to the GATEway driverless pod, built by Westfield Sportscars Ltd using the original Heathrow design. The pod has been equipped with a state-of-the-art control system with 3D imaging and location sensors developed by Bristol-based company Fusion Processing. These sensors enable the pod to navigate and avoid obstacles without the assistance of a driver. The public will be able to watch and engage with a demonstration of the technology.

In addition, BRL will bring a Renault Twizy to the event which has been modified to allow for autonomous driving. It's too small for the public to join as passengers; however they will be able to see how the type of driverless technology currently being developed by VENTURER can be applied to other vehicles in the future.

Also present at the event is Pepper, a programmable humanoid robot created by SoftBank Robotics who can talk and notice the emotions of humans around him. Pepper will be around during the weekend for people to interact with and members from the BRL will be on hand to talk about the exciting technology they are working on.

The VENTURER project, based in the Bristol and South Gloucestershire region, and GATEway, based in the UK Smart Mobility Living Lab in the Royal Borough of Greenwich, London, have similar objectives. As part of the Government’s commitment and funding to future transport technologies, both projects aim to explore the public perception and understanding of Connected and Autonomous Vehicles (CAVs). Both projects are using virtual simulations and physical test beds in order to better understand the legal and technical challenges of implementing automated vehicles in urban environments, and to further shape and inform public policy. VENTURER is also testing autonomous technology on real roads using the autonomous Wildcat vehicle.

Simon Tong, the TRL Technical Lead for the GATEway project said: "Driverless vehicles are going to transform the way we move goods and people around cities. We would like to thank At-Bristol Science Centre for hosting GATEway's first Fusion-powered driverless pod before it leaves Bristol for its new home in Greenwich and I hope that this event will help people understand more about connected and autonomous vehicles."

Phil Winfield, At-Bristol's Chief Executive, said: "It's fantastic to be able to include the VENTURER consortium and the GATEway project as part of our 'Festival of What If' and we're sure that the GATEway pod, Pepper and the modified Renault Twizy will all appeal to our usual visitors as well as new ones. We can't wait to see how the world of driverless cars will change transport in Bristol and further afield."

The GATEway pod, Pepper robot and Renault Twizy will be at Millennium Square from 10am-4pm Friday 4 – Sunday 6 August. Please note there may be charges for other events part of the 'Festival of What If' – please visit At-Bristol for more information.

About Bristol Robotics Laboratory (BRL)
Bristol Robotics Laboratory (BRL) is the most comprehensive academic centre for multidisciplinary robotics research in the UK. It is a collaborative partnership between the University of Bristol and the University of the West of England (UWE Bristol), and home to a vibrant community of over 200 academics, researchers and industry practitioners. Together, they are world leaders in current thinking on service robotics, intelligent autonomous systems and bio-engineering. An internationally recognised Centre of Excellence in Robotics, BRL’s state-of-the-art facilities cover an area of over 4,600 sq. metres (50,000 sq. feet).

About the VENTURER consortium
VENTURER brings together a rich partnership of public, private and academic experts in order to establish the South West, UK as a world class test site facility for Connected and Autonomous Vehicles (CAV). VENTURER focuses on the users as well as the technology enabling CAVs in order to understand the blockers and drivers to wide scale adoption of CAV capability.

About At-Bristol Science Centre
At-Bristol is a leading science centre in the UK and a major player in the worldwide science centre movement with over 305,000 visitors a year, including over 60,000 school visits.