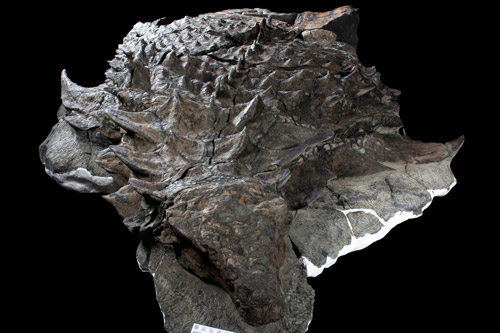 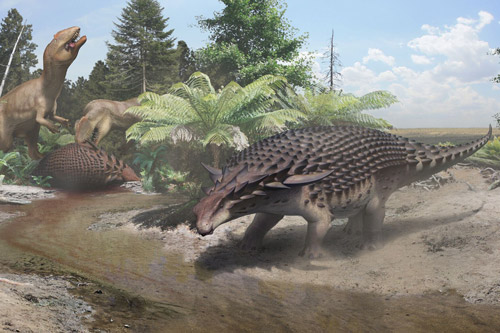 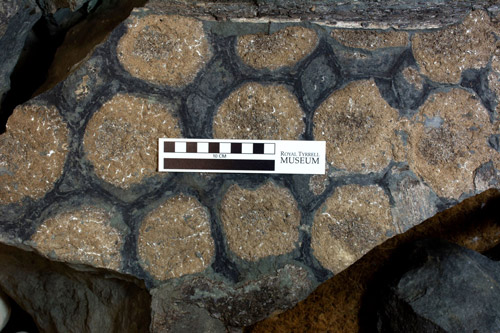 The skin and osteoderms from Borealopelta. The dark skin impressions are remains of reddish brown melanin Royal Tyrrell Museum

Detailed analysis of the fossilised skin of a newly discovered species of dinosaur has revealed that despite being the size of a tank and heavily protected with armour, it was still hunted by savage predators.

Palaeobiologist and expert on fossil pigments Dr Jakob Vinther, from the University of Bristol's School of Earth Sciences worked with researchers from the Royal Tyrrell Museum of Palaeontology in Alberta, Canada to study the 18-foot long specimen’s exquisitely well-preserved form.

Using chemical analysis of organic compounds in the horns and skin to infer the dinosaur's pigmentation pattern they found that the skin exhibited countershading, a common form of camouflage in which an animal’s underside is lighter than its back.

This suggests that the nodosaur, named Borealopelta markmitchelli, faced predation stress from other meat-eating dinosaurs.

Dr Vinther said: "We found a lot of sulphur bearing organic compounds, which we later could confirm was evidence for reddish brown colouration."

Dr Vinther added: "Although countershading is common, the findings come as surprise because Borealopelta's size far exceeds that of counter shaded animals alive today. It suggests the dinosaur was under enough pressure from predators to select for concealment.

"No animals on land exhibit countershading today that are greater than a metric tonne while Borealopelta is estimated to have weighed about 1.3 tonnes.

"This means that the Cretaceous period was a really scary time to be around in. Large theropod dinosaurs with excellent colour vision would have made life stressful for many a dinosaur, both big and small.

"Jurassic Park would be a real nightmare if it were possible to recreate dinosaurs."

The specimen was found by accident in March 2011 by mining machine operator Shawn Funk at the Suncor Millennium Mine in Alberta.

He noticed that there was something unusual about some of the rock formations. The Royal Tyrrell Museum was notified and sent a crew, including Curator of Dinosaurs Dr Donald Henderson, to take a look. They soon realised that the rocks contained an armoured dinosaur.

Dr Henderson said: "Finding the remains of an armoured dinosaur that was washed far out to sea was huge surprise. The fact that it was so well preserved was an even bigger surprise."

The real work began when the specimen arrived back at the museum. Over the last five and a half years, museum technician Mark Mitchell spent more than 7,000 hours slowly and gently removing rock from around the specimen to reveal the exceptional, fossilised dinosaur inside. The new species is named in Mitchell's honour.

The specimen now represents the best-preserved armoured dinosaur ever found, and one of the best dinosaur specimens in the world, the researchers say.

Lead researcher Caleb Brown from the Royal Tyrrell Museum, added: "This nodosaur is truly remarkable in that it is completely covered in preserved scaly skin, yet is also preserved in three dimensions, retaining the original shape of the animal.

"The result is that the animal looks almost the same today as it did back in the Early Cretaceous.

"You don't need to use much imagination to reconstruct it; if you just squint your eyes a bit, you could almost believe it was sleeping. It will go down in science history as one of the most beautiful and best preserved dinosaur specimens - the Mona Lisa of dinosaurs."

Researchers are now examining the dinosaur's preserved gut contents to find out the nature of its last meal, and working to characterise the body armor in even greater detail.

The research was supported through the National Geographic Society.