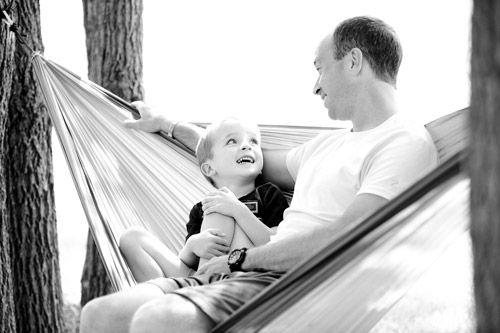 Talking about the highs, and understanding the lows, of being a dad is the theme of a new project led by an inter-disciplinary team of academics from the University of Bristol.

Conversations with fathers is based on the idea that we need to talk more, and more realistically, about fatherhood, and aims to create a space for the conversations about fatherhood that it might be difficult to have, as well as showcase and celebrate what is great about being a dad in 2017.

Working closely with Bluebell, the charity for fathers, the project also hopes to develop new resources for, and by fathers, on everyday practices of fatherhood.

On Wednesday, August 16 (from 11am-3pm) the project team will be at the Blaise Castle House Museum Family Day and are keen to talk to fathers about what it’s like to be a dad, what is challenging and what they think information men becoming fathers ought to know.

Dr Jonathan Ives, Lead Academic for the Project and Senior Lecturer in Biomedical Ethics and Law, said: "We want to learn about fatherhood by speaking to fathers themselves, and documenting what they like about being a father, what is challenging, and what they think other (or future) fathers ought to know.

"We also want to speak to children about their fathers, and think about things that children of any age might want to say to their fathers. We are also interested in conversations between fathers and their parenting partners."

Sociologist Professor Esther Dermott added: "Basically, we want to encourage and promote having conversations with fathers, about fatherhood.

"Above all, we aim to promote thought and reflection about fatherhood, and to explore and portray the realities of modern fatherhood - both the highs and the lows."

Matt Ashley, a 39-year-old solicitor from Bristol and dad to Millie (3) and William (8 months), is one of the dads taking part in the project.

After Millie’s birth, he struggled with depression for eight months and found there was little or no support for men in his situation.

He said: "The run up to the birth was stressful as my wife Rachel was treated for high blood pressure three times in the last month of her pregnancy.

"On the third occasion she was admitted to the maternity unit at Southmead Hospital and her labour was induced. After two days in labour she was given an emergency C-section. I found all this very stressful - it is not what ante-natal classes prepare you for.

"Once Millie and Rachel came home I found the transaction to being a new dad - dealing with a reduced amount of sleep, supporting my wife as a new mum, and learning how to care for a baby - very overwhelming. This caused me to become very insular and suffer from what I now understand to be depression.

"Thanks to my wife speaking to the health visitor, I was put in contact with and received some private counselling from a now defunct charity called Hopes Place. This allowed me some time to talk about my feelings and put them in context.

"During these sessions I was able to "cry-out" the negative feelings I had been suffering. I then self-referred to the Bristol and South Gloucestershire psychological service who arranged for me to attend an anxiety awareness course."

Matt has since recovered from his depression and now loves being a dad to two wonderfully happy and inspiring children, but at the time of his illness he says there was little or no awareness of the services available to help him and other dads in his situation.

He added: "It was very much us seeking help first and then getting treatment by asking and pushing at the right doors. Maternity services are very well geared up to treat new mum and new baby and to look for the signs of postnatal depression in mums.

"Their understanding and monitoring of dads for the same symptoms is non-existent in my experience, unless you have previously suffered from depression as I have.

"I feel strongly that there should be some provision made in the ante-natal process that as a minimum makes dads-to-be aware of a vulnerability to depression at the time of the birth of their child and if they are feeling depressed, where they can seek help.

"By taking part and support Jonathan and his colleagues' work I feel I am giving something back to potentially help others who may suffer the same illness I went through."

Conversations with Fathers is one of the projects funded by the University of Bristol’s Brigstow Institute. This brings researchers from different disciplines together with a range of partners across the city and beyond to experiment in new ways of living and being. Their themes of work focus on: living well with technologies, living well with difference, living well with uncertainty and living well. All research is underpinned by a commitment to a distinctive way of working that foregrounds inter-disciplinarity, co-produced research with – and not just for – external partners, and an emphasis on ‘critical making’ as a research methodology.