The critical point in breaking the glass problem 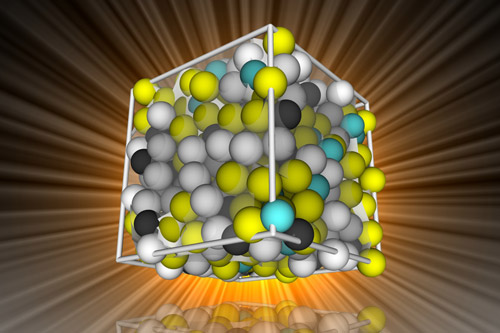 An impression of the “ideal glass” University of Bristol

Famously described as 'the deepest problem in solid state physics' by Nobel Laureate, Philip Andersen, the glass transition, by which a liquid transforms into a solid without freezing, is shedding its mystique.

Until now, researchers' understanding has been splintered at best, with mutually incompatible interpretations of the physical processes underlying the emergence of amorphous solids (glasses).

Now a team of scientists from the University of Bristol and Johannes Gutenberg Universität Mainz in Germany may have found the missing fragment, enabling the reconciliation of differing interpretations.

Dr Paddy Royall from the University of Bristol's School of Physics, explained: "The challenge boils down to whether glass is a true solid in its own right – the so-called thermodynamic interpretation – or whether in essence glass is ‘just’ a very viscous liquid, albeit with a viscosity so large that pouring a ‘glass’ of glass would take around a million times the age of the universe – the so-called dynamic interpretation."

In the thermodynamic interpretation, upon sufficient cooling, a very unusual material known as an 'ideal glass' would form.

Such an ideal glass, like a crystal, has only one way of organizing the constituent atoms – yet mysteriously, is amorphous and disordered.

The paradox of how there can be only one way of arranging the atoms in a disordered material remains, but measurements made by the Anglo-German collaboration indicate that their samples are very close to the ideal glass.

Dr Royall said: "In doing so, they found that the dynamical interpretation of the glass transition seems to end at a ‘critical point’, which is close to, or even coincides with, the temperature at which the ideal glass is formed.

"In other words, the dynamical and thermodynamic interpretations of the glass transition are different reflections of the same underlying phenomenon."