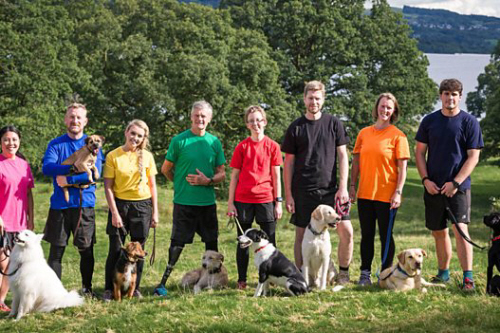 The cast of 'Me and My Dog: The Ultimate Contest' BBC

A dog behaviour expert from the University of Bristol’s Vet School is the scientist on a new television series that starts today [Wednesday 5 April], which pits dog owners and their four-legged friends against each other in a series of challenges.

Me and My Dog: The Ultimate Contest, hosted by broadcaster Chris Packham, is a physical and mental competition programme for humans and their dogs. Eight people who believe they have the ultimate relationship with their canine companions will compete together with their dog.

Over four weeks, canine scientists and dog trainers will help the contestants unlock the full potential of their partnership as they compete in a number of tasks, including paddle boarding and swimming contests on Lake Windermere. The best duos will earn a place in the grand final - but only one pair can win.

The eight pairs are divided into two groups, the reds and yellows, and during each round the teams will face different challenges designed to test the same core skills. In each challenge, the pair from each group that performs best will win four points, the runner-up will score three, third place receives two points, and the pair that come in last will receive one point.

Dr Emily Blackwell, Senior Lecturer in the School of Veterinary Sciences, said: "Working on this programme gave me an opportunity to use the latest advances in canine science to help eight owners gain a better understanding of the unique and special relationship they share with their four-legged team mates. Watching the trust between owner and dog grow through the course of the challenges was a real privilege."

In each episode the teams will come together for a final challenge where everyone competes head to head.

Each challenge is a chance to win points – but only the top scoring pairs from each group will go through to the final at the end of the contest where the finalists will battle it out to see who will be crowned the ultimate champions.

The first episode of Me and My Dog will be broadcast on Wednesday 5 April, on BBC 2 at 8pm. The second episode will air at the same time, the following week [Wednesday 12 April].