The Kevin Elyot Award: A writer’s residency in the Theatre Collection 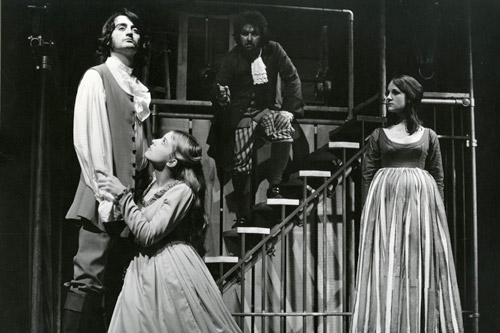 Applications are now open for the University of Bristol Theatre Collection’s Kevin Elyot Award 2017 – created in memory of the acclaimed actor and writer.

It comprises £3,000 to fund the residency for four weeks (which may be consecutive or split), and will also offer support with research and public dissemination of the work.

The award has been generously funded by an endowment given to the University by members of Kevin's family.

His process for adapting novels for television is well documented in the archive. Whilst, the content relating to his plays, including the seminal My Night with Reg, demonstrates his creative process and the particular emphasis he placed on the importance of style and form within a play.

Last year's recipient was playwright Ian McHugh who is in the final stages of creating a new dramatic work inspired by Kevin's archive which was donated to the collection by his sister following his death in 2014.

He said: "It was a huge honour to receive the award last year – I'm very grateful to the panel and to Kevin's family for the endowment.

"Kevin's plays have been a great influence for me, and it was a privilege to spend time with his archive, and use his work to develop new ideas."

Jo Elsworth, Director of the Theatre Collection said: "We hope the Kevin Elyot Award will enable a new generation of writers to find creative inspiration in the archive, so that the spirit of Kevin’s life and work will live on.

"Whilst, on a more personal level, we also hope that this award will make a tangible difference to the award winner and help them develop their own career in writing.

"It is hoped the award will celebrate Kevin’s life and work and the influence he has had on theatre and, through it, will enable a new generation of writers to find creative inspiration in the archive."

Further details of the award and application process can be found here. The deadline for applications is midnight on Tuesday, April 18 2017.

The Theatre Collection is an accredited museum and one of the world’s largest archives of British theatre and Live Art.  Its holdings cover all aspects of theatre history right up to the present day, and its visitors include everyone from international scholars to family historians

It was founded in 1951 to serve the newly formed Drama Department (the first in any University).  Throughout the last 60 years the Theatre Collection has continued to grow in order to reflect all aspects of theatre and performance.