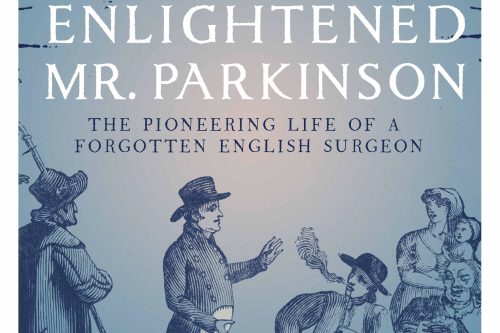 World Parkinson's Disease Day [11 April] is held every year on Parkinson's birthday to raise awareness of the disease and the research being done to alleviate it. To mark 200 years since James Parkinson first identified the condition named after him, a new biography of this forgotten man has been published.

In 1817 James Parkinson (1755-1824) wrote his pioneering Essay on the Shaking Palsy, which first defined the condition we now call Parkinson's disease. The symptoms identified by Parkinson two centuries ago are still used to diagnose the disease today. Although unable to identify a cause for the condition, Parkinson's remarkably accurate description of the symptoms, and the disease in all its different stages, eventually led to it being named in his honour.

The Enlightened Mr Parkinson by Dr Cherry Lewis, Honorary Research Fellow at the University of Bristol, tells the story of Parkinson's life as an apothecary surgeon (similar to today’s GP) in Hoxton, then a village on the outskirts of London. It was a time when epidemics festered in the dirty and overcrowded tenements, infant mortality was fifty percent, and no anaesthetics were available for those unfortunate enough to require surgery.  Smallpox killed ten per cent of the population, so when Edward Jenner discovered a vaccine, Parkinson worked with him to establish vaccination stations across London.

Cherry Lewis said: "Parkinson was not only a pioneer in medicine but also internationally famous for his works on fossils. He revealed an unknown world, populated with 'hyenas the size of bears' and 'enormous marine animals', all of which both enthralled and terrified his readers. His exquisitely illustrated Organic Remains of a Former World placed the study of fossils on the scientific map of Britain before the subject even had a name.

"When awarded The Royal College of Surgeons' first Gold Medal, it was not for his medical publications that Parkinson was honoured, nor even his Essay on the Shaking Palsy, but for his ground-breaking work on fossils."

Parkinson became a political activist after the French Revolution, which many in Britain supported. He wrote numerous outspoken publications which harangued a corrupt and incompetent Government using the pseudonym 'Old Hubert', for many were imprisoned and even transported to Australia for such seditious activities. When caught up in an alleged plot to kill 'mad' King George III, Parkinson put his own life on the line trying to save his friends.

It was almost 50 years after Parkinson's death before the significance of his Essay was fully appreciated and the shaking palsy renamed 'Parkinson's disease' in his memory.

The Enlightened Mr Parkinson by Cherry Lewis is published by Icon Books on 11 April 2017.