Fish lose their unique personality when they go to 'school' 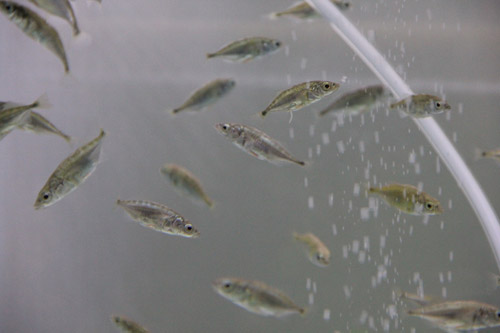 New research carried out by scientists at the University of Bristol has shown that despite individual animals having their own personality, this gets suppressed when they make decisions together in a group.

Dr Christos Ioannou and his colleagues from the School of Biological Sciences tested three-spined sticklebacks (the UK’s smallest freshwater fish) alone and in groups of ten.

They found that just like in humans, braver individuals led the groups, and that the fish stuck together when making a risky decision.

But they concluded that the conformity needed to make a group decision is stronger than braver fish leading, meaning overall, that the individual personalities of fish were lost when in a group.

Dr Ioannou said: "This is the first time that the suppression of personality in groups has been linked to its underlying cause, which is conformity in group decision making."

The researchers also found that testing in a group did not have a lasting effect when individuals were retested alone; it was as if the group tests never happened.

Dr Ioannou added: "The behaviour of the fish seems to be ‘plastic’ to the social situation - they show consistent individual differences in behaviour when tested alone – reflecting personality, but they are also happy to suppress this to be able to stick together with their shoal mates if there are others around."

The research, published today in Science Advances, suggests that in social animals, when things get dangerous and animals form cohesive groups, risk-taking tendency when alone may not be a good indicator of the risk an individual actually faces.

Funding for the research came from the Leverhulme Trust and the Natural Environment Research Council.