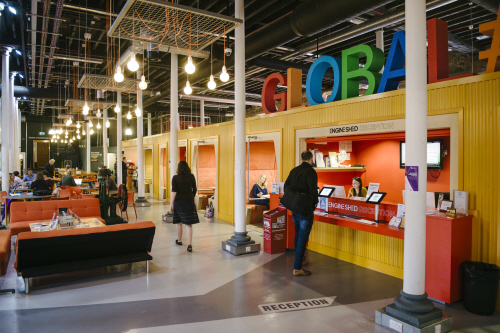 Proposals to expand the University of Bristol-run Engine Shed, and the Enterprise Zone of which the enterprise hub forms a key part, have been approved by Cabinet.

Bristol City Council hopes the new 'urban quarter' will create new jobs and regenerate the area around Bristol Temple Meads station - one of the last remaining unimproved mainline stations in the UK.

Cabinet approved a proposal to enter into an agreement with Skanska that could see the derelict George and Railway site close to the station redeveloped into a home for the expansion of the successful Engine Shed enterprise hub.

Engine Shed, a collaborative project between Bristol City Council and the University of Bristol which opened in 2013, contributed £7 million to the economy and reached full occupancy within 12 months of opening.

It houses the University's Bristol SETsquared Centre, which was named as the best university business incubator in the world last year and is also supporting a record number of businesses.

The potential development offers an opportunity to create more space to inspire young people to be the entrepreneurs of the future while transforming a gateway site close to the station site that has been an eyesore for years.

Nick Sturge, Director of Engine Shed, said: "Engine Shed has been an exciting journey for us, exploring the strengths of collaboration not only between Bristol City Council and the University of Bristol but also the other local universities and local authorities as well as the many partners we have collaborated with.

"Engine Shed 2 will give us significantly more scale to deliver more economic activity in the city-region – that is more inclusive of the local, especially under-represented, communities. We want to create an environment that is iconic and representative of the ambition for the city.

"The cross-party support from Cabinet members was a fabulous sign of the very Bristolian collaborative approach to long-term, sustainable and inclusive economic growth that exists in the West of England and we are proud to be a part of that."

The extension of the Enterprise Zone, to include parts of Redcliffe and other sites close to the existing boundary, would allow future retained business rates to be used to further develop the zone. Redevelopment of the station would open up the Temple Meads East area, allowing the Enterprise Zone to be developed to its full potential.

Following further work to determine exact boundaries, proposals will be submitted by the West of England Local Enterprise Partnership for consideration by government. Subject to approval, the extension would come into effect in April 2017.

Mayor of Bristol, Marvin Rees added: "It is really important that in these challenging financial times we continue to plan for the future and invest in projects that will bring forward inward investment, jobs and much needed homes for our citizens.  The Temple Quarter Enterprise Zone will deliver a new urban quarter for the city, turning sites that have been derelict for years into places that create employment opportunities and are open to all.

"I particularly welcome the proposal to expand the zone that could help to fund the redevelopment of Temple Meads station to create an improved transport hub, ensuring that the full potential of the Enterprise Zone is realised. We will continue to work together with our partners Network Rail, the Homes and Communities Agency and the West of England Local Enterprise Partnership to make this long term aspiration a reality."

A timeline shows the progress of the zone since opening in 2012.

Engine Shed is a collaboration between Bristol City Council, the University of Bristol and the West of England Local Enterprise Partnership at the heart of Temple Quarter Enterprise Zone. Its mission is to stimulate long term economic growth by supporting business, inspiring young people to get involved and to showcase to the public and potential inward investors the exciting opportunities that exist in Bristol.

The building, formally opened by the Rt. Hon. Greg Clark MP on 2nd December 2013 after a £1.7m refurbishment program, houses a number of exciting components.

SETsquared is collaboration between the universities of Bath, Bristol, Exeter, Southampton and Surrey which provides services to accelerate businesses and boost enterprise.

Its incubation programme specialises in growing technology start-ups from bases or 'incubation centres' at each of the five universities. Start-up companies do not have to be based in one of the SETsquared centres, non-residents can be part of the programme, benefitting from the same world-leading mentorship, networking opportunities and access to investors.

In the last 10 years, the SETsquared Partnership has supported around 1,000 companies and helped them raise more than £1bn in capital. In October 2015, the Partnership of SETsquared Centres was ranked best university business incubator in Europe, for the third year running, and best in the world for the first time.

The Bristol SETsquared Centre, now located within the Engine Shed in the heart of Bristol's Temple Quarter Enterprise Zone, supports 64 members who between them employ over 840 people globally.

Since 2007, companies supported by Bristol SETsquared have raised over £188 million and an aggregate turnover, in that period, of over £155 million. It has contributed to the success of Engine Shed, which opened in December 2013 and is credited with powering economic growth in Bristol and the West of England, adding £8 million to the local economy in its first year.