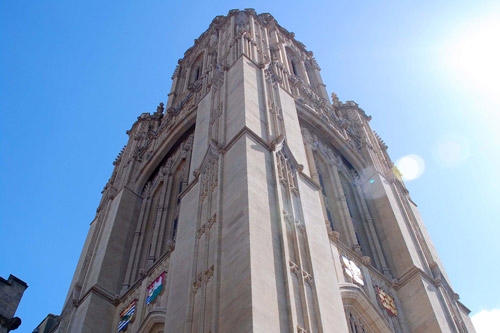 Ever wondered what Bristol looks like from the top of one of its highest landmarks?

The unrivalled view from the roof of the Wills Memorial Building tower is just one of the unique sights which visitors are invited to experience as part of the University of Bristol's contribution to the popular Bristol Doors Open Day event which takes place on September 10 and 11.

Three of its buildings will be open as part of the annual event revealing the city's architectural treasures.

As well as enjoying the view from some 68 metres above Park Street, visitors will be given a unique insight into the history of the Wills Memorial Building, which was opened by King George V and Queen Mary in 1925 before being badly damaged during the Blitz in 1940.

The doors will also be open at the Theatre Collection and Engine Shed as the public are invited to enjoy a rare glimpse behind the scenes of 81 of the city's most interesting buildings.

The popular event grants the public access to Bristol's most interesting and exciting venues, offering visitors an unrivalled opportunity to explore behind the scenes of Bristol's cultural heritage. Entry to all buildings is free.

Bristol Doors Open Day is organised by the Architecture Centre – Bristol's centre for design and the built environment.

The Centre for Public Engagement has arranged for the University to once again take part in the popular city-wide event, which is part of the nationwide Heritage Open Days event - the UK's biggest public participation event.

One of the city's landmark buildings, the Wills Memorial Building was designed in 1912 by Sir George Oatley, providing spectacular interior space. It was one of the last magnificent Gothic buildings constructed in England.

Visitors will have the opportunity to enjoy a tower tour and witness the unparalleled view of Bristol from the top of Park Street. The entrance hall, Great Hall and library will all be open for public viewing.

Tours of the tower are available on the hour from 10am to 4pm on Saturday, September 10. This year there's no need to book – just drop in.

The Theatre Collection is an accredited museum and one of the world's largest archives of British theatre and live art. Founded in 1951 to serve the country’s first Drama Department, it is now an internationally renowned research facility.

On Doors Open Day, visitors will have the opportunity to see two exhibitions to mark the 400th anniversary of the death of William Shakespeare:

It is thought to be one of the oldest surviving terminuses in the world, where passengers and trains inhabited the same space under the one roof. The building was fronted by offices which were home to Brunel’s Boardroom, drawing offices, the Bristol Offices of Great Western Railway and Station Master’s quarters.

The Grade I listed building had a £1.7 million transformation in 2013 thanks to a partnership between Bristol City Council, the University of Bristol and the West of England Local Enterprise Partnership (LEP). It's managed by Bristol SETsquared - the University of Bristol's double award-winning business incubator - which has a third of the current space to provide premium serviced offices for its early-stage technology businesses.

Book online for a talk and building tour at 10am and 2pm on Saturday and Sunday, September 10 and 11.