Bristol leads the way in the wizardly sport of Quidditch 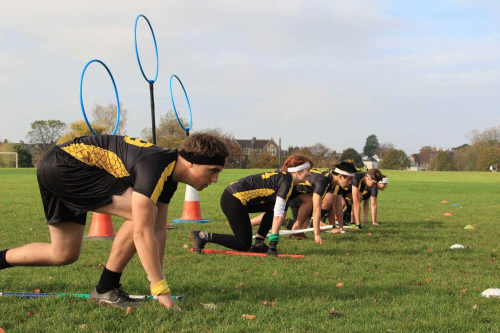 The Brizzlebees prepare for kick-off 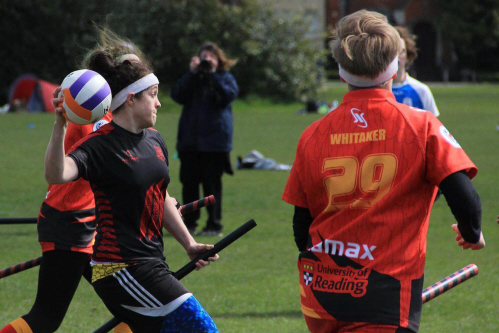 The magical sport of Quidditch, inspired by the Harry Potter series, is being taken to the next level in the UK – thanks to muggle students at the University of Bristol.

Members of Brizzlepuffs, the University’s Quidditch club, have established the country's first ever league for the fast-growing sport. The South West League gets underway on the Downs this Saturday [15 October].

To date, Quidditch has only ever been a tournament-based sport in the UK, with events being held over various weekends throughout the year. There will now be one round of matches every month from October to April.

The fictional version of Quidditch, an exciting and often dangerous sport, features heavily in the popular books and matches have provided the backdrop for plenty of drama.

Muggle Quidditch is surprisingly similar to the wizard version, but minus the flying and spells. It is the fastest growing full-contact mixed gender sport in the world.

Brizzlepuffs' team coach Josh Blannin, who is studying for a Masters in Physics, describes the new league as a 'big progression' for Quidditch.

He said: "A league is something that has always been considered in Quidditch, and so Tom Ower - one of the Brizzlepuff founders - decided to trial it in the South West. It's really great to have an extra six matches guaranteed this year.

"I think the league has been well received, and the rest of the Quidditch community will be watching Bristol over the next few months as we try to make this system work. It will get more teams playing more games in the year, and that's something everyone wants to see."

Brizzlepuffs was founded on 1 October 2014 and has fast become one of the country's best Quidditch teams. They came fourth at Southern Cup 2015, winning qualification for the European Quidditch Cup 2016 in Italy, where we came 12th.

Josh added: "The success of the Brizzlepuffs has been incredible. We've gone from being a brand new team two years ago, to a team which now competes internationally, which is amazing. It's thanks to the high dedication and passion of every player involved."

The club consists of two teams, the Brizzlebears and the Brizzlebees, both of which will be competing in the new league. The five other teams based in the South West are Bath Quidditch Club, Falmouth Falcons, The Swansea Seven Swans, The Exeter Eagles and The Worcester Saucerers.

The playing field is about a third of the size of a football pitch with three circular goals placed on either side.

Players are required to carry a stick or broom between their legs at all times. Slightly deflated volleyballs usually act as the 'quaffle', and dodgeballs serve as the 'bludgers'.

While the 'snitch' is a magical object in the Harry Potter novels, in the real world it's simply a tennis ball contained in a sock tucked in the waistband of the snitch runner, who is a neutral player affiliated with neither team.