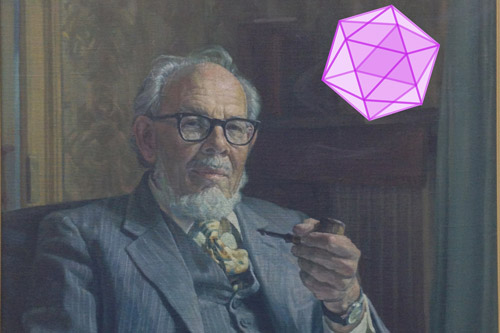 Researchers from the University of Bristol have used state-of-the-art computer simulation to test a theory from the 1950s that when atoms organise themselves into 3D pentagons they suppress crystallisation.

The theory by renowned Bristol physicist, Sir Charles Frank, has been a cornerstone of metallic glass development ever since from high-tech aerospace materials to the covers of our mobile phones.

But until now, the mechanism by which these 3D pentagons could stop the formation of crystal nuclei has been unknown.

Metallic glasses have the potential to revolutionise many commercial applications - they have many of the advantageous properties of conventional metals but are much tougher and harder.

This is because the systems are disordered - the atoms are frozen into a complex, tangled structure.

This is unlike conventional metals which naturally form well-arranged ordered structures, called crystals.

The faults in crystals are what cause the material to break when it is stressed, and so metallic glasses can be far stronger - they have no faults between crystal grains.

Dr Patrick Royall from the School of Chemistry, who led this research with colleague Dr Jade Taffs, said: "In order to manufacture these amorphous materials we need to find a way to stop them from forming crystals.

"This is challenging - decades of research have resulted in a largest sample just 7cm in size. The key question - what is the most effective way of stopping crystallisation, remains unsolved."

Dr Taffs said: "When a crystal is in contact with its liquid, the atoms at the surface of each phase cannot satisfy their bonding constraints: they are "neither liquid nor solid".

"This means the material must pay energy due to the lack of satisfied bonds at the interface between crystal and liquid, and this surface energy is much higher in the case of liquids with fivefold symmetry."

Dr Royall added: "Liquids crystallise through the spontaneous creation of small crystals, and this process is extremely dependent on the size of the surface energy of the crystals.

"Because the surface energy is higher when the liquid has fivefold symmetry, nuclei form at a much lower rate. Identifying the mechanism by which crystallisation may be suppressed is an important step in the development of metallic glasses, and may open the door to using metallic glass in applications from vehicles to spacecraft."

‘The role of fivefold symmetry in suppressing crystallisation’ by P. Royall and J. Taffs in Nature Communications.