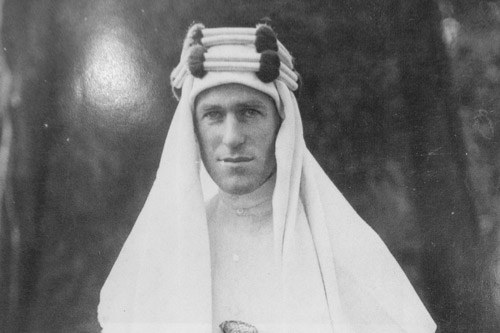 A UK-first exhibition based on 10 years of research led by two University of Bristol archaeologists lends credence to the account Lawrence of Arabia gave of his own extraordinary exploits in the desert.

He has been called a charlatan and fantasist but what emerges according to Neil Faulkner and Professor Nick Saunders from the Department of Archaeology and Anthropology is the re-rehabilitation of a war hero.

TE Lawrence was a low-ranking British military intelligence officer who played a key role in the Great Arab Revolt (1916-18) against the Turkish Ottoman Empire during the First World War.

Memorably photographed in Arab dress, he was accidentally 'discovered' by an American reporter and became an iconic figure of the 20th century, feted by royalty and immortalised in David Lean's classic 1962 film.

But since then separating the man from the myth has proved impossible, especially after a critical biography was published in the 1950s.

Now his reputation and impact are being reassessed in a UK first exhibition hosted by the National Civil War Centre in Newark, Nottinghamshire.

It is based on 10 years' research by archaeologists following in Lawrence's footsteps in the Jordanian desert, armed with Seven Pillars of Wisdom, his own often criticised account of the revolt, fully published in 1935.

Neil Faulkner, who together with Professor Saunders, headed the Great Arab Revolt Project (GARP), drawing on volunteers from across the world, said: "We found field evidence to support Lawrence's claims wherever we looked.

"For three years we searched to locate one of the desert camps he used before launching attacks on the Hijaz railway line.

"There we found spent cartridges and rum bottles discarded by British troops. We also excavated the site of the deadly attack on a Turkish supply train, featured in David Lean's film.

"Furthermore, all along the railway’s path we discovered and investigated long-abandoned sites which had been built or repurposed during the epic struggle between the Ottomans and the guerrilla forces of the Arabs and their British allies."

Scores of artefacts being displayed for the first time, including the chest used by Lawrence to carry gold to pay Arab chiefs and a section of blown up railway line.

Also on show is a robe worn by Lawrence in a 1919 publicity shot that helped turn him into a worldwide celebrity.

Neil Faulkner added: "Many in the Arab world view Lawrence as a third rate agent of imperialism. He was a very unlikely war hero - an orientalist and archaeologist, as well as a misfit and maverick. But he was a brilliant military commander.

"Without his help it's unlikely the Arab army would have achieved the success it did in defeating the Ottoman Empire."

The exhibition also focuses on Lawrence the man, his legacy and the aftermath of the Great Arab Revolt.  A copy of a map he drew up with polymath Gertrude Bell on how the region should be reshaped for consideration by the British Government is also on display.

Michael Constantine, Manager of the National Civil War Centre, added: "We're thrilled to work with the GARP team to host this fascinating show.

"Although we are primarily tell the story of the 17th century clash between King and Parliament, we also step outside our time-period to stage world class exhibitions. Previously we have hosted Magnum

"Agency photographs of civil wars in the twentieth century in places like Yemen, Somalia and Syria, which links to the aftermath of the Great Arab Revolt.  Of course the story of Lawrence is also truly spell-binding."

The show runs until 31 March 2017 and is open daily 10am to 4pm.  Entry is free with normal admission to the National Civil War Centre: £8 adults, £7 concessions and £3.50 children.  A season ticket is £16 and English Heritage members go half price.

The National Civil War Centre is a £5.4m flagship project by Newark and Sherwood District Council, supported by £3.5m from the Heritage Lottery Fund. It is the only UK museum telling the complete story of the British Civil Wars – the most deadly in our entire history.  Other galleries portray Newark's wider history and stage temporary exhibitions.

A new book by Neil Faulkner based on the GARP findings called Lawrence of Arabia’s War: the Arabs, the British, and the Remaking of the Middle East in WWI has been published by Yale University Press.

One of GARP's trips to Jordan included writer-in-residence, Jan Woolf.  Her new play, The Man with the Gold, explores Lawrence's complex personality and the myth machine that produced ‘Lawrence of Arabia’. It is set for performances in Oxford, Newark and London.