The houseplant with a blueprint for improving energy harvesting 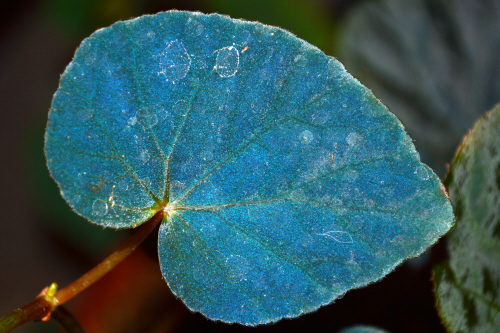 For many people, nanotechnology belongs in the realm of science fiction. Researchers at the Universities of Bristol and Essex have solved the mystery of the blue sheen on the leaves of some begonias and have found that their chloroplasts have evolved a nanoscale light-trapping structure to help them survive in the darkness of the forest floor.

The research team, led by Dr Heather Whitney at the University of Bristol, in collaboration with the University of Essex, have discovered that plants, including species commonly grown as houseplants or in gardens, have long been using a very special form of nanotechnology - called photonics - to create structures in their leaves that help them to harvest light for photosynthesis.

Begonia species are well-loved horticultural plants, long prized for their decorative leaves and flowers. One reason for their popularity is their ability to survive indoors without direct sunlight. This is because many begonias grow beneath tropical forests, where the light reaching the ground may be a tiny fraction of that at the top of the tree canopy. Plants here need to scavenge every bit of light they can in order to survive.

There are over 1,500 species of Begonia, and for a while, it has been known that some species show a bright blue sheen to their leaves. The biological function of this unnatural looking blue sheen was unknown: was it to deter predators or protect the leaf from too much light?  This mystery has remained unsolved until a team headed by Dr. Heather Whitney at the University of Bristol’s School of Biological Sciences began to study Begonias and noticed something new.  They found that the leaves only developed a blue sheen when put in almost dark conditions and in bright light the sheen slowly disappeared.

Matt Jacobs, PhD student in the School of Biological Sciences and first author on the paper, said: "We discovered under the microscope, individual chloroplasts in these leaves reflected blue light brightly, almost like a mirror. Looking in more detail by using a technique known as electron microscopy, we found a striking difference between the ‘blue’ chloroplasts found in the begonias, also known as 'iridoplasts' due to their brilliant blue iridescent colouration, and those found in other plants.  The inner structure had arranged itself into extremely uniform layers just a few 100 nanometres in thickness, or a 1,000th the width of human hair."

Knowing that these layers were small enough to interfere with blue light waves and that there must be a link, the biologists collaborated with Dr Ruth Oulton and Dr Martin Lopez-Garcia  from Bristol's Photonics group based in the Department of Electrical and Electronic Engineering and School of Physics, who discovered that the structures looked very similar to the artificial structures commonly used to make miniature lasers and other photonic structures that control the flow of light.

By performing the same optical measurements as those used to measure their artificial components, the photonics researchers were able to understand the iridoplast structures in more detail. They were able to predict that while the structure reflects all the blue light, it actually absorbs more green light.  This might seem surprising but in the forest shade where begonias are found the upper canopy trees absorb most of the blue light, leaving only green light filtering through to the begonias on the ground.  So have the iridoplasts evolved to scavenge the remaining green light in the understory canopy?

The final piece in the jigsaw came when researchers at the University of Essex studied the rate of photosynthesis in these iridoplasts compared to normal chloroplasts and found that in very low light levels, the iridoplasts performed better.

The mystery of why the Begonia leaves are blue is partially solved but more questions need to be answered, such as are photonic chloroplasts far more widespread than in these Begonias? And can researchers use this design, perfected by evolution, in other plants to improve crop yields, or in artificial devices to make better electronics? Further research needs to be carried out but the Begonia holds more secrets than the average household plant.