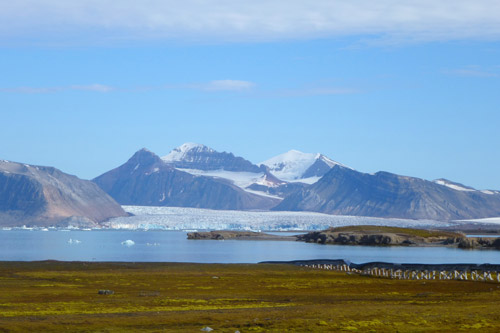 A team of researchers from the Universities of Bristol and Leeds collected soils from an ‘alien-like’ post-glaciation landscape in the Norwegian archipelago, Svalbard, which had only recently been uncovered after several thousand year old ice had melted away.

Upon laboratory-based analyses of these soils, they found that incredibly diverse communities of microbes, the smallest and simplest forms of life on Earth, colonised these habitats, despite freezing temperatures and relative starvation from nutrients.

The microbes colonising and thriving in these soils must cope with starvation from nutrients, and extreme seasonal swings in environmental conditions, with short cool summers punctuated by long harsh winters.

By comparing soils of different age, it was clear that microbial biomass and activity increased over several years of exposure.

The research group from Bristol and Leeds were the first to combine molecular and geochemical analyses with new computational techniques and modelling software designed at the University of Bristol.

Their findings were published recently in Biogeosciences and the project was funded by NERC.

This model was designed to simulate microbial growth and biogeochemical cycling in response to prevailing environmental conditions such as soil temperatures, sunlight, and the external input of nutrients.

This integrated approach clearly demonstrated that microbial processes in these desert-like soils were responsible for rapid rates of organic carbon and nutrient turnover, with microbes both fixing CO2 from the atmosphere and emitting CO2 via respiration and degradation of organic carbon.

Lead author James Bradley, from the School of Earth Sciences at Bristol (and now based at the University of Southern California), said: "Our research has shown that growth and diversification of organisms in these new alien-like Arctic landscapes occurs rapidly, within decades.

"We now hope to use modelling techniques to upscale these findings to explore the effect of much larger scale melting of ice in Polar regions that is expected at the current rate of global climate change.

"Furthermore, the ability of these organisms to colonise such harsh landscapes as Arctic glacier forefields expands our general understanding of life's ability to thrive in extreme environments."