Quasimodo illuminates the secret to the ticking of our internal clocks 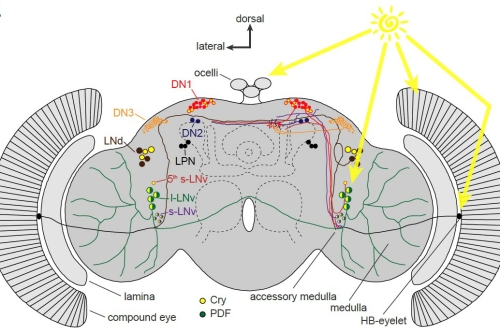 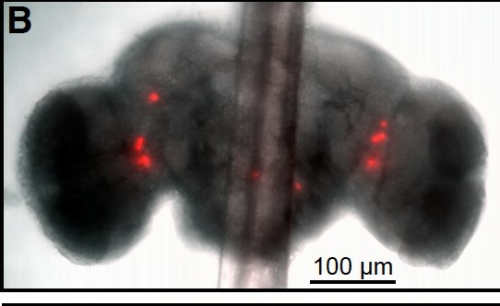 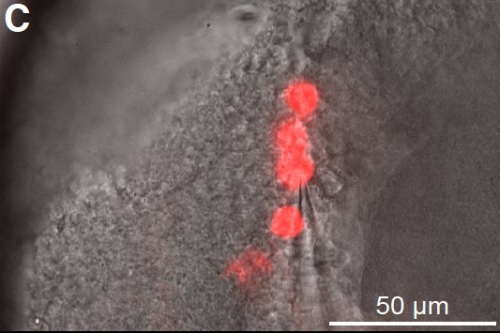 Detail of a clock neuron with recording electrode

Is it possible to stop the ticking of time and what might it mean if we could? It’s a question many will have pondered and now there is an answer – thanks to the humble fruit fly.

Drosophila fruit flies are so named after the Latin for “dew loving” because they are more active at dawn and dusk.  This strong sense of circadian rhythm (the 24 hour time cycle) is generated by a clock that ticks in the brain of all animals including humans.

The fly’s clock consists of about one hundred neurons in its 100,000-neuron brain, which can fit on a pin head. Inside each clock neuron is a “molecular clock” that consists of clock genes, which switch each other on and off every night and day.

Writing in the journal PNAS today, a team of researchers, led by Dr Edgar Buhl and Dr James Hodge from the University of Bristol in collaboration with Professor Ralf Stanewsky’s group at UCL, explain how they identified three novel proteins that act together on the surface of clock neurons to make the clock light responsive.

“To be useful for an organism, circadian clocks need to be synchronized (or reset) to the natural environment cycles of light and temperature, much like you need to reset your alarm clock or watch when you change time zone,” said Dr Hodge from Bristol’s School of Physiology, Pharmacology and Neuroscience.

The findings could ultimately have implications for identifying novel membrane drug targets for sleeping disorders and jetlag, while furthering scientific understanding of the relationship between body clocks and health, as well as ageing and neurodegenerative disease.

The research builds on one of Professor Stanewsky’s earlier discoveries regarding the Quasimodo gene, named after the fact that some mutant versions of the gene caused Drosophila to have hunched backs.

Using a red fluorescent protein to illuminate the clock neurons and record electrical activity in the brain, the authors showed that Quasimodo regulates light responses in the fly’s clock neurons, thereby controlling the circadian rhythm.

The Quasimodo protein is localised at the cell surface and electrical activity is generated in the membrane by small pores called ion channels. Therefore attention was turned to ion channels that were known to be active in clock neurons and that could potentially interact with Quasimodo to form a “membrane clock”, which could control these day-night differences in electrical activity.

The first component of the membrane clock was a potassium channel called Shaw (dKv3.1), which Dr Hodge and Professor Stanewsky had previously shown to be important for circadian rhythms. The second component was the ion transporter NKCC, which also plays an important role in the day/activity changes in the mammalian brain clock.  This latest study shows that Quasimodo interacts with Shaw and NKCC to form a membrane clock that controls daily changes in electrical activity of clock neurons, which allows the clock to respond to light.

The research was funded by a joint BBSRC grant.  Future studies aim to characterise the membrane clock in further detail and to see if it is conserved in mammals.