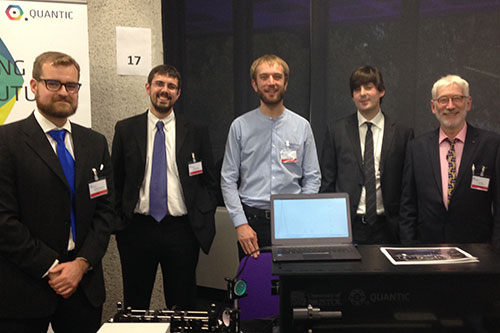 Members of Bristol’s Centre for Quantum Photonics presented their latest demonstrations to industry leaders, funding bodies and government representatives at this year’s Quantum Showcase in London.

The researchers occupied three stands in the exhibition space at the QEII Centre in Westminster, at an event attended by industry, government and funding bodies. The showcase was an opportunity to highlight to these attendees how quantum technologies can be applied to their businesses.

Bristol is a major partner in two of the hubs that make up the National Quantum Technologies Programme: the QuantiC hub in Quantum Enhanced Imaging, and the Quantum Communications Technology Hub.

The showcase was a valuable opportunity to share revolutionary work and network with fellow researchers, developers and potential future collaborators.