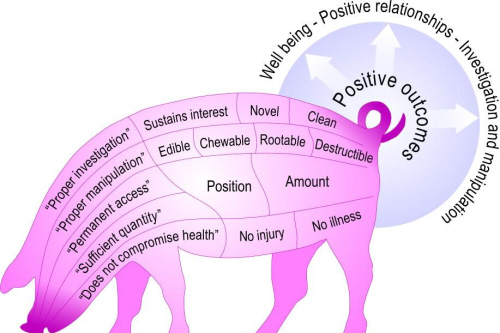 Animal welfare legislation has been developed for many countries and many species but its impact depends on whether it is followed. New research has found an online training tool can improve participants’ understanding of EU tail docking and enrichment legislation, as well as risk factors for tail biting.

The training tool was aimed at official inspectors and other people involved in enforcement of legislative requirements on pig farms. The study, led by the School of Veterinary Sciences at the University of Bristol, was a collaboration of 15 researchers from nine EU countries and is published in Animal Welfare.

Dr Siobhan Mullan, Senior Research Fellow in Farm Animal Science in the School of Veterinary Sciences at the University of Bristol, said: “The training package was designed for professionals involved in the assessment of finisher pig welfare and was well received by the participants. Our research has shown that the training improved the consistency of the participants’ professional judgements and improved their knowledge of several aspects of the legislation, particularly where assessment of compliance might be considered contentious or difficult. We also found that participants would strongly recommend the training package to other persons involved in assessing the welfare of finisher pigs in the EU.”

In the first section of the test participants rated the importance of modifying environmental enrichment defined in nine scenarios from one (not important) to ten (very important). Training significantly increased participants’ overall awareness of the need for change.

Participants then rated nine risk factors for tail biting from one (no risk) to ten (high risk).

After training, scores were better correlated with risk rankings already described by scientists. Scenarios relating to tail docking and management were then described. The researchers found that training significantly increased the number of respondents correctly identifying that a farm without tail lesions should stop tail docking. Finally, participants rated the importance of modifying enrichment in three further situations.

The pattern of results indicated that the participants’ roles influenced scores but overall the study found that training improved ratings in all three areas, which were: i) recognition of enrichments that, by virtue of their type or use by pigs, may be insufficient to achieve legislation compliance; ii) knowledge on risk factors for tail biting; and iii) recognition of when routine tail docking was occurring.

The online training tool is free to use and is available in seven languages.

‘Standardising the assessment of environmental enrichment and tail-docking legal requirements for finishing pigs in Europe’ by Hothershall et al in Animal Welfare.