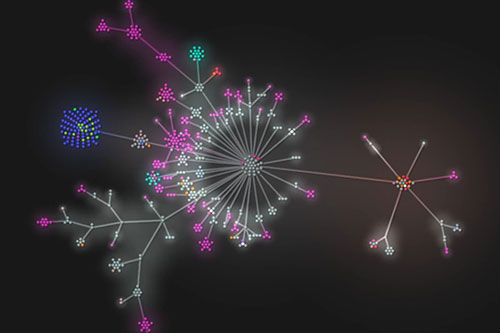 A graphical representation of LMFDB activity

A solution to the greatest unresolved problem in pure mathematics – Riemann’s hypothesis – could be coming closer, thanks to a remarkable international collaboration involving mathematicians from the University of Bristol and University of Warwick, part-funded by a £2.24million grant from the Engineering and Physical Sciences Research Council (EPSRC).

Seventy mathematicians from 12 countries are creating a massive online database – the L-functions and Modular Forms Database (LMFDB) – in an effort to document the last collection of elementary mathematical functions that we do not fully understand.  If written on paper, the LMFDB would be an encyclopaedia of some 10,000 volumes with 500 pages each.

Begun six years ago, it represents the collective work of over 70 collaborators in more than a dozen research areas, all of whom are building connections between their seemingly separate specialities. “Most of us are aware of these relationships in an abstract way, but it takes real work to actually figure out all the details,” said Dr Andrew Booker of Bristol’s School of Mathematics, a co-investigator on the EPSRC grant.

Several important theoretical discoveries have already occurred as a result of the LMFDB project.  These include important steps towards a major goal of twenty-first century mathematics: understanding Riemann’s hypothesis.  This fundamental theory of a deep connection between addition and multiplication was sketched in 1859 by German mathematician Bernhard Riemann.  In essence, it is a statement about the location of the solutions of the equation L = 0 where L is one of an infinite set of functions, appropriately called ‘L-functions’.

The solutions of L = 0, called the zeros, are supposed to be on the same line called ‘Riemann’s line’, a vertical line which, when plotted on a graph, passes through the point 1/2,0.  They are infinite in number so could never be checked by computer.  However, LMFDB participants have charted billions of these zeros on millions of L-function landscapes, and so far all of them are on the line predicted by Riemann.

Such progress is only possible through the collaborative approach of LMFDB which has enabled researchers to share huge amounts of data and link their projects together.

Professor Brian Conrey, Director of the American Institute of Mathematics and a Senior Research Fellow in Bristol’s School of Mathematics, said: “We are mapping the mathematics of the twenty-first century.  The LMFDB is both an educational resource and a research tool which will become indispensable for future exploration.”

Professor John Cremona of the University of Warwick, Principal Investigator on the EPRSC grant said: “While the database was built to provide tools that could help tackle the Riemann hypothesis, one of the Millennium Prize Problems nominated by the Clay Mathematics Institute, I also hope it will be a useful tool for researchers of another of the Clay Millennium problems: the Birch and Swinnerton-Dyer conjecture on the set of rational solution to equations defining an elliptic curve.  I was privileged to be one of Professor Bryan Birch’s doctoral students and would be delights if this work was used to help prove the Birch and Swinnerton-Dyer conjecture.”

The £2.24million EPSRC grant is one of the largest ever awarded in the UK for pure mathematics.  It is led by Professor John Cremona of the University of Warwick, with co-investigators Professor Brian Conrey (Bristol), Dr Andrew Booker (Bristol), Professor Jon Keating (Bristol) and Professor Samir Siksek (Warwick).

Around ten mathematicians from the University of Bristol are working on the project, including a number supported by fellowships from the Heilbronn Institute for Mathematical Research.

The official launch of the LMFDB takes place on Tuesday 10 May and will be marked in the UK by a workshop at the University of Bristol, sponsored by the Heilbronn Institute for Mathematical Research.

Important theoretical discoveries that have occurred as a result of the LMFDB project so far include the verification of the modularity of a genus two curve (the first generalisation to higher dimensions of Andrew Wiles proof of Fermat’s Last Theorem in 1995), and the location and calculation of the first 4th dimensional transcendental L-function (also called a Maass form L-function).