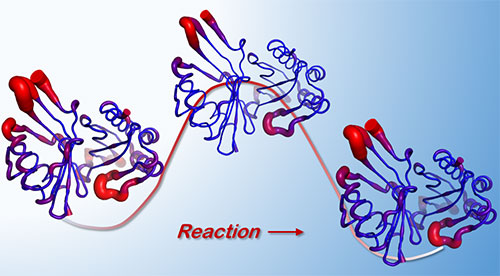 How enzymes – the biological proteins that act as catalysts and help complex reactions occur – are ‘tuned’ to work at a particular temperature is described in new research from groups in New Zealand and the UK, including the University of Bristol.

Professor Vic Arcus (University of Waikato) and colleagues, including Bristol’s Professor Adrian Mulholland and Dr Marc van der Kamp, showed that the heat capacity of enzymes changes during a reaction as the enzymes tighten up.  Exactly how much the enzymes tighten up is the critical factor in determining the temperature at which they work best.  These findings could provide a route to designing better biocatalysts for use in chemical reactions in industrial processes, such as the production of drugs.

So what makes them less active?  And what is it that causes enzymes from different organisms to have different catalytic activities at the same temperature?  Enzymes from organisms that live at normal temperatures are not very active at low temperatures, while cold-adapted enzymes are active in the cold – why, when they have very similar structures?

The new research, published as a ‘New Concept’ in Biochemistry (and selected for the American Chemical Society (ACS) Editors’ Choice), shows that a basic physical property – the heat capacity – explains and predicts the temperature dependence of enzymes.  The heat capacity of a substance is the amount of heat required to raise its temperature by one degree.  For enzymes, the heat capacity changes during the reaction and this change is ‘tuned’ to give the optimal temperature.

Professor Mulholland said: “Our theory – macromolecular rate theory, (MMRT) – applies to all enzymes, and so will have a critical role in predicting metabolic activity as a function of temperature.

The theory also explains why enzymes are so big (the more ‘difficult’ the chemistry to catalyse, the bigger the enzyme).  It also hints at why proteins were eventually preferred by evolution over nucleic acids as catalysts in biology: proteins offer much more ability to ‘tune’ dynamics and their response to chemical reactions.