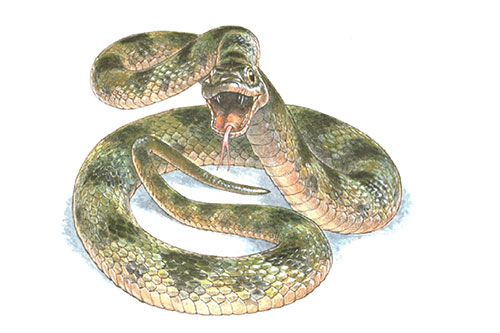 A study of a ten-million-year-old fossilised snake has shown for the first time that mineralised tissues can preserve evidence of colour, shedding new light on how ancient organisms would have looked.

Previously, the only pigments known to have survived fossilisation were browns, blacks and muddy reds when melanin lasts as organic material. But the ancient snake’s skin was fossilised in calcium phosphate, a mineral that preserves details on a subcellular level.

Dr Maria McNamara, a palaeobiologist at University College Cork and colleagues, including Dr Stuart Kearns of Bristol’s School of Earth Sciences, found that the fossilised snakeskin maintained the unique shapes of different types of pigment cells.  These would have created yellows, greens, blacks, browns and iridescence while the animal was alive.  The pigments themselves are now decayed but with the cell shapes – specific to each kind of pigment – mineralised, there was enough information to reconstruct their colours.

Dr McNamara first came across the fossilised snake while conducting her PhD research on fossils from the Libros site in Spain. Analysis at the Electron Microbeam Laboratories in Bristol’s School of Earth Sciences (the same laboratory that first reported on the colour of dinosaur feathers in 2010) revealed stunning detail of the morphology and chemistry of the fossilised skin.

Dr Kearns said: “Our analysis using high powered electron microscopes revealed, for the first time, the exceptional preservation of mineralised chromatophores, the pigment-bearing and light-reflecting cells responsible for colour in a wide range of animals.”

The team then matched up the shapes of these mineralised skin cells with pigment cells in modern snakes to determine what colours they might have produced.

The researchers determined that the fossilised snakeskin had three types of pigment cells in various combinations: melanophores, which contain the pigment melanin; xanthophores, which contain carotenoid and pterin pigments; and iridophores, which create iridescence.  All told, the snake was a mottled green and black, with a pale underside: colours that likely aided in daytime camouflage.

“Up until this discovery, the only prospect for skin colour being preserved in fossils was organic remains related to melanin,” said Dr McNamara. “But now that we know colour can be preserved even for tissues that are mineralised, it’s very exciting.”

Calcium phosphate mainly shows up in fossil bones and shells, but records do exist of so-called phosphatised skin.  This discovery opens the door for re-analysis of these fossils, occurring across a wide range of creatures and locations, for evidence of colour preservation.  Knowing the colour of an animal can give researchers clues to some aspects of its behaviour and evolution.