When Britain was fringed by tropical seas 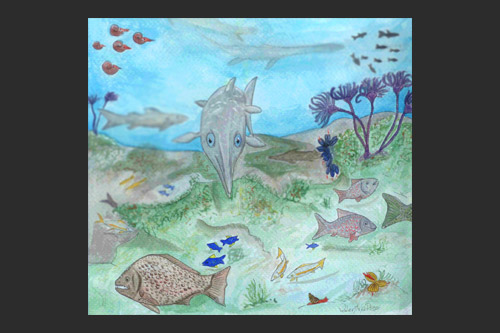 Denizens of the deep 210 million years ago near Bristol: an ichthyosaur sizes up the armoured fish, Dapedium, at bottom left. Sharks and ammonites swim in the background in tropical seas Drawing by Valentina Rossi, one of the lead authors of the work

A team from the University of Bristol has shed new light on the creatures that inhabited the tropical seas surrounding Britain at the start of the age of the dinosaurs.

Some 210 million years ago, Britain consisted of many islands, surrounded by warm seas. Europe at the time lay farther south, at latitudes equivalent to North Africa today. Much of Europe was hot desert, and at this point was flooded by a great sea – the Rhaetian Transgression.

Published in Proceedings of the Geologists' Association, the Bristol team's work is the most extensive study yet, based on more than 26,000 identified fossils, of the Rhaetian shallow sea sharks, bony fishes, marine reptiles, and other creatures. Unusually, five members of the team were undergraduates when they did the work, and this was part of a series of summer internships.

Ellen Mears said: "I studied the shark and fish teeth, and found remains of at least seven species of sharks and four of bony fishes. The sharks were all predators, but some were quite small. The bony fishes were unusual because many of them were shell crushers."

Valentina Rossi, who worked on the reptile remains, added: "We found teeth and bones of ichthyosaurs and plesiosaurs, the classic great sea dragons of the Triassic and Jurassic, as well as some other reptiles, including a tooth possibly from a dinosaur – but it was heavily worn."

Professor Michael Benton, who supervised the students' work over the summers of 2014 and 2015, explained: "The students came to the project with no prior knowledge, but each one took on the task of identifying and documenting their group of fossils. They had to look at thousands of specimens and assign them to species, and then each contribute their part of the paper to proper professional standards. This is the eighth paper published from this internship scheme."

The new work has emphasized the complexity of major global changes, like this remarkable rise in sea level ten million years ago. It has been documented from dozens of localities in England, but also from central Europe. Careful measurement of the rock sections, and documentation of the fossils bed-by-bed allow us to reconstruct the to-and-fro of major animal groups over a few million years.

The fossils even include dozens of examples of coprolites, pellets of dung, hat were deposited by the various fishes and reptiles – some of these even contain bones and scales of fishes, and one even shows small bones of a marine reptile – clear evidence of who was eating whom in those ancient seas.

For more information about the undergraduate internship programme, visit 'At the Feet of the Dinosaurs'.

The research team would like to thank Hanson plc, who greatly supported the work by providing access and guidance to the quarry.