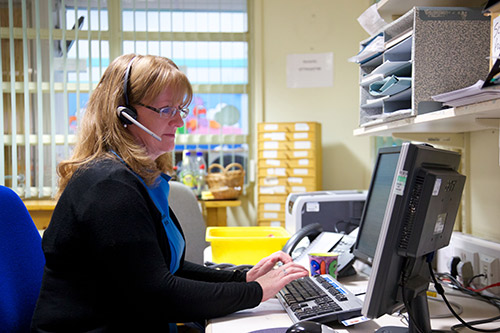 There is considerable optimism amongst policy-makers that greater use of digital health technologies ('telehealth') in combination with new ways of working could transform health care delivery, helping the NHS to be sustainable in the face of rising demand.

But in a study published today in the British Medical Journal (BMJ), researchers conclude that while telehealth could provide some benefit to some patients, it is not a simple answer to a complex problem.

Led by researchers from the University of Bristol's Centre for Academic Primary Care, and funded by the NIHR, the Healthlines study aimed to evaluate the effectiveness and cost-effectiveness of a new telehealth service. The trial of the Healthlines Service involved participants receiving regular telephone calls from a health advisor, who supported them in addressing their own health goals and directed them to relevant online resources, or sent them the information by post.

The researchers recruited 641 adults with a high risk of heart disease or strokes (cardiovascular disease) to a randomised controlled trial of the Healthlines Service. Half the patients were given usual care while the other half were given usual care plus contact about once per month from a Healthlines Service advisor. They looked for improvements in the participants’ risk of cardiovascular disease, blood pressure, weight, body mass index, cholesterol and smoking status.

Professor Chris Salisbury, a GP and head of the Centre for Academic Primary Care, led the research. He said: "We found some evidence that the Healthlines Service led to modest improvement in overall cardiovascular risk for a minority of participants, but had no impact on average risk. But the Service did have other benefits, such as improvements in diet and physical activity, and patients were more satisfied with their access to care and the treatment they received."

In a separate paper, published recently in Lancet Psychiatry, the researchers describe using the Healthlines Service to support patients with depression. Compared with usual care alone, intervention participants reported small improvements in depression and anxiety, better access to support and advice, greater satisfaction with the support they received, and improvements in self-management.

"There has been much enthusiasm about the potential of telehealth, but there have been very few studies testing a telehealth system in a real-world application on a large scale," said Professor Salisbury.

"The results of our studies show that while a telehealth intervention such as this can be beneficial to some patients, it is not the magic bullet that some policy-makers seem to think it is. However, it is a relatively low-cost intervention that can make health care more accessible for conditions that affect a large number of patients, so there is good reason to continue exploring ways to make telehealth more effective in future."

The team is now analysing the cost-effectiveness of this intervention in detail, and hopes to publish its results before the end of the year.

'Effectiveness of an integrated telehealth service for patients with depression: a pragmatic randomised controlled trial of a complex intervention' by Chris Salisbury et al in The Lancet Psychiatry

This research was funded by the NIHR Programme Grants for Applied Research (PGfAR) programme (RP-PG-0108-10011).

The National Institute for Health Research (NIHR) is funded by the Department of Health to improve the health and wealth of the nation through research. The NIHR is the research arm of the NHS. Since its establishment in April 2006, the NIHR has transformed research in the NHS. It has increased the volume of applied health research for the benefit of patients and the public, driven faster translation of basic science discoveries into tangible benefits for patients and the economy, and developed and supported the people who conduct and contribute to applied health research. The NIHR plays a key role in the Government's strategy for economic growth, attracting investment by the life-sciences industries through its world-class infrastructure for health research. Together, the NIHR people, programmes, centres of excellence and systems represent the most integrated health research system in the world.