From bench to bedside: new research centre to benefit humans, animals and the environment 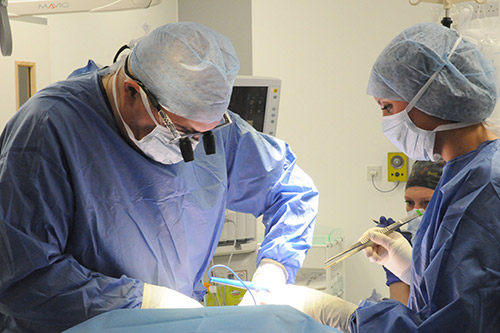 A new national centre, unique in the UK and Europe, that will take research out of the laboratory and closer to the bedside to ensure more patients worldwide can access ground-breaking treatments as quickly as possible will be officially opened today [Thursday 9 June].

The £6.2 million Translational Biomedical Research Centre (TBRC), funded by the University of Bristol, the Medical Research Council (MRC) and the British Heart Foundation (BHF), will be opened by the MRC Chief Science Officer, Dr Declan Mulkeen and by the BHF Medical Director, Professor Peter Weissberg.

Translational medicine aims to take lab science performed 'in vitro' – in a test tube or on tissues, cells or molecules outside of the body – and prove it has positive effects on a whole living organism.  Prior to human trials, new discoveries are tested in animals, but only when there is no other way to confirm they are safe and have beneficial health outcomes.  This is often the case when testing new medical devices such as heart valves, vascular stents, joint replacement prostheses, instrumentation used for key-hole surgery, devices to deliver new drugs in patients with cancer or to test novel drugs and stem cells.

TBRC will use experimental models highly relevant to human disease and anatomy to test such pioneering new medical approaches, devices or therapies in a state-of-the art animal hospital theatre operating at NHS standards.  Results of any interventions will then be tracked in living animals using state-of-the-art scanners, just like in the NHS. This will allow researchers to develop new treatments and interventions whilst reducing the number of animals needed because they are able to monitor the animals over time. During and after treatments the animal will be treated by veterinary specialists that will ensure the highest standards of animal welfare and reproducibility of the procedures.

The centre will also have a bio-bank on site – a long-term store for cells and tissues collected post-mortem that can be shared nationally to biomedical scientists, which will reduce the future need for animal tissue samples.  The bio-bank will enable cells (including stem cells), spare eggs and tissues to be kept alive for 20 years or longer, just like how the NHS keeps human samples.

TBRC will operate under the One Health concept that recognises the health of humans is connected to the health of animals and the environment. Given people share many of the same health problems as animals; they both suffer from tumours and age- related diseases such as arthritis, research done at the centre could also improve the lives of many animals.  Veterinary clinical scientists will also work at TBRC to develop new methods to treat animals, which often could be as simple as adapting treatments already established in humans.

Professor John Iredale, Pro Vice-Chancellor for Health at the University of Bristol, said: "The new centre is a key part of the University's research strategy to fast track the translation of fundamental discoveries to the bedside. TBRC will work together with other centres in the UK and EU to drive the developments of new treatments. The animals and the centre will benefit from the University's extensive veterinary expertise and the state-of-the-art hospital.

"This is an important development in the University's vision for a research culture that feeds directly and quickly into real and lasting benefits for the health and welfare of both humans and animals."

Professor Raimondo Ascione, Director of TBRC and Professor of Cardiac Surgery and Translational Research in the Faculty of Health Sciences, added: "The new research centre will bridge a gap in the UK research system between basic scientists, the NHS, and the biomedical industry. It will allow a new medical device to be delivered by expert vets and NHS doctors on a single animal at clinical standards and to be tracked, non-invasively, over time, just as we do in NHS patients, using sophisticated scanning techniques. With the on-site veterinary and animal welfare expertise, we can be sure that the animals are treated with the same care and sensitivity as human patients."

Professor Peter Weissberg, Medical Director at the BHF, added: "The BHF invests millions of pounds in basic scientific research each year. We are committed to ensuring that discoveries in the laboratory, made possible by the public's donations, are translated into new treatments for patients as quickly as possible.

"The BHF is delighted to partner once again with the MRC in advancing cardiovascular health. The TBRC will ensure that research carried out in Bristol and beyond, particularly relating to new surgical techniques, will reach patients even more quickly."

About the Medical Research Council (MRC)
The Medical Research Council is at the forefront of scientific discovery to improve human health. Founded in 1913 to tackle tuberculosis, the MRC now invests taxpayers’ money in some of the best medical research in the world across every area of health. Thirty-one MRC-funded researchers have won Nobel prizes in a wide range of disciplines, and MRC scientists have been behind such diverse discoveries as vitamins, the structure of DNA and the link between smoking and cancer, as well as achievements such as pioneering the use of randomised controlled trials, the invention of MRI scanning, and the development of a group of antibodies used in the making of some of the most successful drugs ever developed. Today, MRC-funded scientists tackle some of the greatest health problems facing humanity in the 21st century, from the rising tide of chronic diseases associated with ageing to the threats posed by rapidly mutating micro-organisms.

About the British Heart Foundation (BHF)
For over 50 years we’ve pioneered research that’s transformed the lives of people living with heart and circulatory conditions. Our work has been central to the discoveries of vital treatments that are changing the fight against heart disease. But so many people still need our help. From babies born with life-threatening heart problems to the many Mums, Dads and Grandparents who survive a heart attack and endure the daily battles of heart failure. Every pound raised, minute of your time and donation to our shops will help make a difference to people’s lives. For more information, visit bhf.org.uk